What If a Typical Family Spent Money Like the Federal Government? 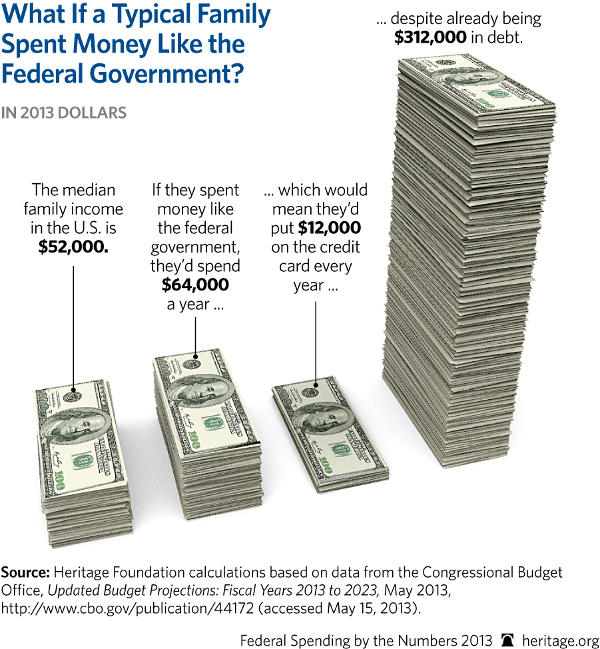 at 10:53 AM
Email ThisBlogThis!Share to TwitterShare to FacebookShare to Pinterest
Labels: Linkfest

We use the word "government" as a convenient reference, but we live today under the rule of our politicians. They have no difficulty mincing words and ignoring any restrictions on their actions.

Our politicians construct policies and procedures to give the appearance that they are looking into the future and are implementing thoughtful plans to "guide the nation". These are just stage props. Politicians have the shortest planning horizon of all people, only to the next fundraiser for the next election. We have a government of men with guns and a time horizon of next week.

A wise person carefully evaluates his needs and only borrows to do something that is vital and prudent. He must get great value out of the borrowing and have a solid plan to repay it. Otherwise, he is better off consuming less. He might compute the greatest amount he could safely borrow as a way of considering his plans. A man who sets a debt limit is signalling his intelligence.

So, the Congress sets a debt limit to falsely signal planning. It gives the appearance that Congress is involved in deep thought about what the US should borrow. In fact there is no limit, and there is no planning, restriction, or determination which would set that limit. The President and Congress do not plan to avoid that limit, they just blow past it.

What will stop the borrowing? Failed auctions of Treasury bonds and 20%+ inflation.

- -
What would the US financial situation look like in proportion to a family with $50,000 of disposable income after tax? This is easier to understand and more frightening than the huge, official figures.

Mary Meeker is a partner at Kleiner Perkins, a large and respected venture capital fund. Her work is analyzing and investing in businesses.

She has analyzed U.S finances as she might do for a large corporation. Busines Insider talks about her report "A Summary of America's Financial Statements". My post uses mostly Meeker’s figures and gives links to her graphs of US finances.

The destruction of our economy and our society is all part of the Cloward-Piven strategy. And so far, it's almost working perfectly. The only problem leftists have is that they put an idiot calling himself 'Barack Hussein Obama' in charge of the plan.

On our side, we only need honest, brave leadership. That rules out the GOP. But we do have the brave patriots of the Tea Party. Vote for them, and stave the GOP.

I suppose Barry knows that if he tanks America's economy there are not enough Agencies on the planet to cushion him from the multiplied millions of people who will want a reckoning.
It's one thing to be a tin pot dictater in Africa, it is another to presume to be the leader of the free world.