MARK LEVIN ON OBAMA'S HANDSHAKE WITH CASTRO: "The bigger the gulags that they have, the more deference he gives them"

Yesterday Mark Levin returned to the microphone, offering some choice words for Barack Obama and his bizarre deference for mass-murdering dictators.

All this talk about the memorial for Nelson Mandela in South Africa. And Obama conducting himself in a reckless manner because that's what he does for which he's cheered on by the lib media. Honestly, I was surprised that Obama and Raul Castro didn't exchange spit. Really.

We all know Obama has an affinity toward these totalitarian regimes. I'm not surprised in the least. And he's bowing to them and shaking their hands -- almost the bigger the gulags that they have, the more deference he gives them. 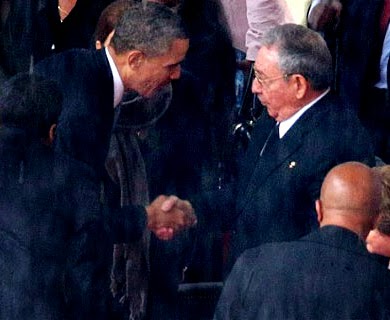 But, I was thinking. When Obama leaves office, there won't be tens of millions of people newly freed from behind the Iron Curtain, or under the thumb of some third world dictator, and so forth as they were under Reagan and Thatcher. Margaret Thatcher was responsible for -- along with John Paul II and Ronald Reagan -- the freedom of over a hundred million people behind the Iron Curtain, and with Reagan, also in our own hemisphere in toto.

Obama won't be in any such movements. In fact, I dare say more people will be imprisoned and enslaved when he leaves office then before he came to office. And it's a disgrace -- as I said maybe two weeks ago, but certainly last week -- how our government, the Obama administration, treated the passing of Margaret Thatcher, who is responsible for the freedom of more people than any of Obama's favorite leaders or what have you. Absolute disgrace.

And there they are clowning it up, acting goofy, in the stands, in the cheap seats. Just ridiculous. I listened to Obama for Obama for about fourteen seconds and there he was again, what effect Mandela had on him. He started with the I, I, I. I said that's enough, I don't need to hear this crap. And I didn't and I'm not playing any the clips either because I don't care what he said. It doesn't matter to me. It doesn't affect my life nor yours.

One thing that did happen there that should draw our attention, at least to a point, as pointed out in the White House Dossier website. When Former President Bush, George W. Bush, when his face appeared on the video monitor at the memorial, in Johannesburg, he was booed. He was booed according to the White House poll report, which cited local press outlets.

Now, when the images of Obama and his wife popped up there was a thirty-second deafening roar, the pool writer wrote.

George W. Bush did more for South Africa and Africa period than Barack Obama has ever done. Obama is better at crafting his public image and saying the right things.

Bush personally saved the lives of millions of South Africans with his President’s Emergency Plan for AIDS Relief, or PEPFAR, ensuring AIDS drugs are available to South Africa’s impoverished masses.

And he's booed. He's booed. The Washington Compost talked about the success of this program. It said:

In South Africa, the success ( of PEPFAR) was extraordinary. AIDS killed roughly 2.3 million in South Africa -- once one of the worst-affected countries in the world -- and orphaned about a million children there, according to the United Nations. Today, rates of infection have fallen to 30 percent, and nearly 2 million people are on antiretroviral drugs.

Meanwhile, Obama has cut this program and generally has been customarily inattentive to it, as The Washington Post essentially reported. He's cheered, Bush is booed, the media is slobbering all over Obama.

Larry Elder also posed an excellent question that is sure to be ignored by the left and vintage media (but I repeat myself).

Obama said he'd change name "Redskins" to avoid offending Native Americans. How many Cuban-Americans were offended by the Raul handshake?