So you've signed up for health care on the ObamaCare exchanges. Think you're covered? Not quite.

So you've signed up for health care on the ObamaCare exchanges. Think you're covered? Not quite.

As with any insurance plan, new enrollees still have to pay their first month's premium to lock in coverage. But the deadlines for that task are different all over the country, adding to the confusion over an already-perplexing sign-up process... 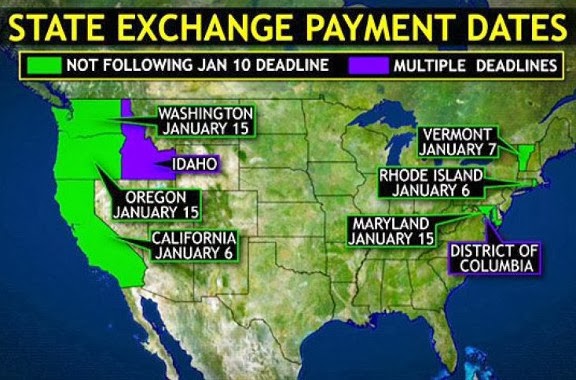 The deadlines in the ObamaCare enrollment process have been a moving target. For those seeking coverage for the start of the new year, the deadline to sign up was originally Dec. 15. Then it was moved to Dec. 23, and then again to Dec. 24. Even after that deadline passed Tuesday night, the administration announced that those who ran into technical problems on HealthCare.gov could still seek an exemption and get covered by Jan. 1.

Then comes the next set of deadlines. After appeals from the Obama administration, major health insurers announced earlier this month that they would give people until Jan. 10 -- as opposed to Dec. 31 -- to pay their first month's premium and have coverage effective Jan. 1.

But many states running their own exchanges have their own deadlines for first payments. Some have more than one... In Idaho, for instance, Blue Cross, Bridgespan and Select Health extended their deadline to Jan. 10. But PacificSource extended its deadline to Jan. 15. The deadlines in Washington, D.C., also depend on the insurer.

...After the first set of deadlines, would-be enrollees still have until the end of March to get insurance, after which the federal government will begin to fine those without coverage.

Still, the administration has carved out exemptions for certain people and businesses, including those whose plans were recently canceled. The insurance industry has raised concern about these changes, warning that they could disrupt the market...

...President Obama said at his end-of-year press conference that 1 million people have signed up through the federal and state exchanges, marking a significant uptick since the Oct. 1 launch. Officials, though, were originally projecting a goal of 7 million people by the end of March.

Not to worry: it's gonna get much, much worse before it gets better.

Thanks Hitlery, you and the Swimmer got this ball rolling in the early 90's because you said our Doctors were greedy. May you rot.

Quite a simple post which indicate very important point here. I am waiting for new post from you now.
Gynecologist mountain view, ca

This is a point I make with my new parody video!

A Day In the Life (under ObamaCare)