While many on the Left (and the Right) believe that the Presidential candidacy of Hillary Clinton is a foregone conclusion, there is another woman that many on the Left—and of greater importance, within labor’s ranks—would rather see become President and they are beginning to voice their preference ever more loudly.

Last week, the AFL-CIO hosted a “wage summit” and Warren–not Clinton–was among the keynote speakers.

Though, in the past, she has claimed she is not running for President, Warren is receiving much more attention from the institutional Left—including the ever-important union bosses—than the presumed nominee.

However, what AFL-CIO boss Richard Trumka said about Warren—and, to a lesser extent, Clinton—is causing concern for Clinton supporters: 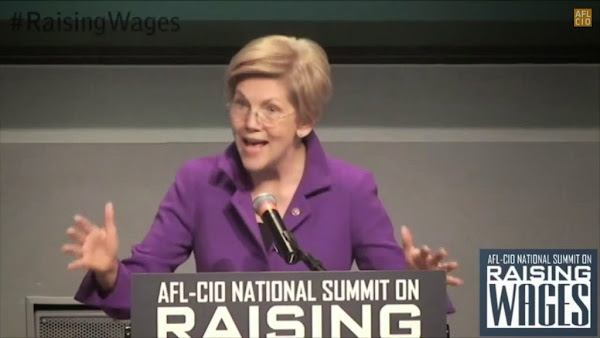 He continued: “Senator Warren, thank you. You have always been and will always be a remarkable, remarkable champion of working people.”

Despite labor’s power within the Democratic Party, Trumka has shied away from weighing in on 2016 politics. His remarks about Warren, however, are glowing, especially compared to what the labor leader said about Hillary Clinton, the Democratic front-runner and former secretary of state, in August 2014.

“I think that Hillary did an excellent job as secretary of state. I think she is very, very qualified to be president,” Trumka said at a breakfast with reporters in Washington. “Would I say she is the favorite now? Yes. But I think anytime anybody believes there is going to be a coronation, that is dangerous for the candidate.” [Emphasis added.]

Warren’s populist-styled speech at last week’s AFL-CIO summit sounded like a liberal’s dream manifesto and included, according to the Washington Times, “raising the minimum wage, breaking up Wall Street banks and raising taxes on big business to help shore up entitlement programs and pay for infrastructure projects.”

Warren, however, is not a new face among unions.

Even prior to her rise to the U.S. Senate, union bosses like the AFL-CIO’s Trumka were enamored with Warren—even going so far as to campaign for her in 2010 to become chairman of her brainchild, the then-newly created Consumer Financial Protection Bureau.

In our view, there is only one candidate who is uniquely qualified and equipped to head this new agency. Harvard Law School Professor Elizabeth Warren originated the idea of the Consumer Financial Protection Bureau, and has proven as Chair of the Congressional Oversight Panel to be a strong and fearless advocate for the American public. We therefore strongly urge President Obama to appoint Professor Warren as Director of the new consumer protection bureau.

Although, a mere four years later, the CFPB is plagued with low morale and employee confidence, the Left is still in love with Elizabeth Warren.

As late as last April, Trumka called Warren his “prototype” of the person he’d want in the White House.

“In my opinion, she is the prototype of a person we would want to be president of the United States. She has a very well-defined set of values and unlike many politicians, she actually sticks by those values and fights to implement them.”

Some writers at the Daily Kos are so in love with the idea of Warren for President that it a post entitled “She may not want to, but we need Elizabeth Warren to run for president” which detailed why:

We need Elizabeth Warren to run for president. Whether she wins or loses, no one else can more effectively reshape the message and policy agenda of the Democratic Party, and there’s no better way for her to do so than with the platform of a White House run.


The hard-core Left’s MoveOn.org has a “Run Elizabeth Run” petition campaign with 200,000 signatures already having been gathered. 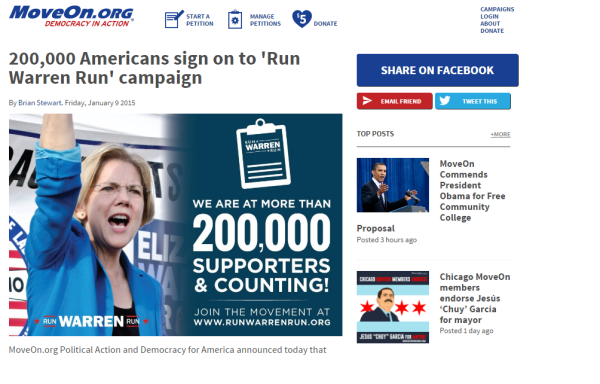 According to one focus group in Colorado–comprised of Democrats, Republicans and Independents–Republicans have cause to be concerned about Warren’s populism as well.

If union bosses and the Left being more enamored with Elizabeth Warren than they are with Hillary Clinton is any indication, Clinton’s ascension to the Oval Office is anything but assured.

“I don’t want to get in trouble, but I’ll say it anyway,” Epps-Addison said. “It starts with this idea that we have a presumed front-runner for the Democratic nomination for president, because if we don’t accept that … if we say that we demand somebody to actually meet our needs before we’re going to give them a candidate for the presidency, then that can make a difference.”

Her comment drew applause not only from the audience but, presumably, many more on the Left.