"ONE OF THE LARGEST STORMS IN HISTORY": 24 Inches of Global Warming Set to Slam NYC

How much you wanna bet that Al Gore is in the Big Apple? 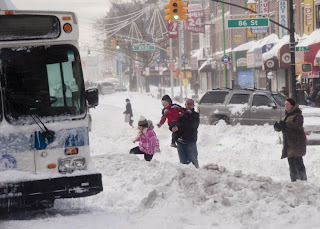 New York braced for one of the biggest blizzards in “the city’s history,” with over 24 inches of snow expected to blanket Gotham on Monday and Tuesday, authorities said.

“We are facing one of the largest storms in the city’s history,” Mayor de Blasio said. “This could be a storm…the likes of which we have never seen before.”

Snow is expected to begin falling just before sunrise on Monday before the serious blizzard kicks in late in the afternoon and through Tuesday morning’s rush, forecasters said ... “New Yorkers should not underestimate this storm. Assume the conditions will be unsafe,” de Blasio said. “When you can stay indoors stay indoors.”

...As difficult as Monday morning’s commute will be, that’s a cake walk compared to what’s coming on Tuesday. Commuters and pedestrians alike will have to deal with winds between 20 mph and 40 mph, dropping the real-feel temperature and blowing snow right into faces of New Yorkers.

But remember, folks: weather is not climate, unless it backs up the global warming scam.

Notify ALGORE and all the morons that were in Davos last week.