HEROES, NOT ZEROES: American Sniper vs. the State of Obama's Disunion

Valor: When Hollywood icon Clint Eastwood talked to an empty chair at the 2012 GOP convention, many thought he'd lost it. Now more Americans are watching his story of hero Chris Kyle than saw the State of the Union. 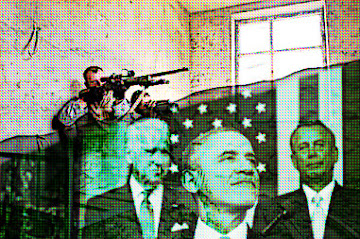 There was a sense of irony in President Obama praising himself for a "persistent, steady resolve" in fighting an Islamic terrorism he refuses to call by name.

He delivered his State of the Union speech just as the U.S. military was moving the assault ships Iwo Jima and Fort McHenry into the Red Sea to evacuate American personnel, if necessary, from another of his success stories imploding into chaos.

Yemen is on the verge of following Libya's slide into a failed state dominated by Islamic radicals. The Islamic State that Obama silently watched grow remains in control of wide swaths of Syrian territory where many red lines were drawn in crayon.

It's also in control of Iraqi towns where Americans expended great blood and treasure before he threw their sacrifice away with a precipitate withdrawal.

Rather than a persistent, steady resolve, Americans see a callous cluelessness. After four Americans were murdered in a terrorist attack in Benghazi, they saw their commander in chief fly to Las Vegas for a fundraiser. Rather than march with a world protesting the Charlie Hebdo attack in Paris, they saw their president stay home to meet and greet the San Antonio Spurs.

Obama touts success where there are no successes, which is perhaps one of the reasons the ratings for his State of the Union addresses have steadily declined and why his policies, which he said were on the ballot in November, were soundly rejected by voters.

Obama's absence from the Paris march is reminiscent of the empty chair that Eastwood talked to at the 2012 Republican National Convention. It was meant to be a metaphor for Obama's all-style-and-no-substance presidency.

Today, that chair is symbolic of America's disappearance from the world stage and its abandonment of world leadership. Eastwood, widely mocked at the time, was right on target, and the success of "American Sniper" is his vindication.

The setting for his gripping tale of American heroism and sacrifice is Iraq, a tragic example of Obama's failed leadership. War is hell, and "American Sniper" shows that. But war often is necessary, and the movie shows that too. There is evil in the world, evil that must be resisted, as Navy SEAL Chris Kyle, a genuine American hero, did valiantly.

The movie's $105 million opening weekend showed that America is hungry for heroes. Yet it does not gloss over the moral dilemmas of war and the toll they take on our veterans. We owe them a great honor and debt, not a shameless withdrawal that renders their sacrifice meaningless.

Nor does the movie gloss over the horrors of the enemy we face, an enemy Kyle rightly called "evil f---ing savages" that rape women, kill children and shamelessly torture and behead those who oppose its ruthless brutality. Americans want the truth. They can handle the truth. And they want and need to be reminded that we're the good guys.

The movie also shows Kyle's struggle with post-traumatic stress syndrome, a chilling reminder of the Veterans Administration scandal that Obama pledged to solve but festered with tragic results on his watch.

Americans who are flocking to see "American Sniper" remember a commander in chief whose motorcade shamelessly passed the Phoenix VA hospital without stopping, the facility where veterans like Kyle died on waiting lists, a president who literally gives active-duty soldiers pink slips on the battlefield.

America needs heroes, but they didn't see one Tuesday night.

It is not a disaster to Obama - he WANTS the MB to take over. He is NOT on our side. I'm so sick of writers writing articles from the viewpoint that Obama's ME tactics have failed. NO, THEY HAVE NOT. Not to Obama. Why this lying Muslim traitor to this country has not been militarily removed from office is a crime in-and-of itself.

I totally agree with Anon above. Obama is a Muslim. He doesn't like America. His policies have succeeded incredibly well, FOR HIM.

America is already burning. Look at the riots he has encouraged! Look at how the USA has turned into a police state! God, how successful he has been!

I'm not a very good Christian, so I often find myself hoping that he catches ebola, so he can share some of the pain that he has caused. If anyone ever deserved such a fate, he's the one!