Say, I wonder how President Obama did on his 2014 promises?

President Obama made a lot of promises about how he’d make the world a better place in 2014. He said he’d fight the bad guys, force them to back down, stand up for freedom around the world.

In April 2014, the Nigerian Islamist group Boko Haram, which literally means no education for girls, kidnapped 276 schoolgirls. On May 9, First Lady Michelle Obama posed with this sign: 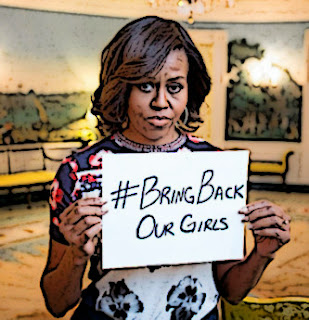 Taking over President Obama’s weekly address, she said this:

"This unconscionable act was committed by a terrorist group determined to keep these girls from getting an education - grown men attempting to snuff out the aspirations of young girls,' she said. 'Let us hold their families in our hearts during this very difficult time, and let us show just a fraction of their courage in fighting to give every girl on this planet the education that is her birthright."

A couple of weeks later, Obama himself spoke about Boko Haram in a speech at West Point:

"Tragically, no American security operation can eradicate the threat posed by an extremist group like Boko Haram. That is why we must focus both on rescuing those girls, but also on supporting Nigerian efforts to educate its youth."

So, what happened to the girls? Many of them were forced to convert to Islam and then forcibly “married” – i.e. raped – by the members of Boko Haram. Just days after Michelle Obama’s #BringBackOurGirls hashtag, Boko Haram reportedly drove 3,000 out of their homes and kidnapped their children. Just days after Obama’s West Point address, two of the girls were found buried and another two were found raped in the forest. In June, Boko Haram reportedly kidnapped another 91 girls. That came on top of the slaughter of an entire village the month before.

So yeah, that worked out well.

Okay, so how about Russia? President Obama talked a tough game when Vladimir Putin decided to annex Crimea in March 2014. On March 26, Obama said this:

"Russia’s leadership is challenging truths that only a few weeks ago seemed self-evident, that in the 21st century, the borders of Europe cannot be redrawn with force, that international law matters, that people and nations can make their own decisions about their future."

And then, in December, Obama signed a bill that would put further sanctions on Russia. Except he then announced that the administration wouldn’t be imposing those sanctions. Here’s what Putin had to say in his New Year’s address about Crimea.

This event will forever remain a most important milestone in our history.

Okay, well how about stopping ISIS? After the Islamic State in Iraq and Syria took over a large swath of Iraq, just months after Obama called them a terrorist jayvee team, President Obama pledged to cripple them:

"Our objective is clear: we will degrade, and ultimately destroy, ISIL through a comprehensive and sustained counter-terrorism strategy."

So, how’s that going?

Here’s a map from the New York Times of what ISIS controls today in Iraq. The red dots are ISIS-controlled places, and the pink shaded areas are ISIS controlled as well. Everything in yellow are places under assault by ISIS. This map shows ISIS in control of Mosul and Falluja, and placing Baghdad under recurring attack.

It’s safe to say that the three biggest foreign policy stories of the last year involving the United States were unmitigated failures for President Obama. He broke his promises to the girls of Nigeria, the Ukrainians, and the victims of ISIS. But don’t worry. At least he can use his Nobel Peace Prize as a paperweight.