I think the Taurus Curve represents a true breakthrough design for the handgun. And I'm in agreement with veteran gun-blogger Bob Owens of Bearing Arms (a winner of a 2014 Fabulous 50 Blog Award): the Curve is an extremely positive development for the Second Amendment because it makes concealed carry accessible to a new, large segment of the American population. 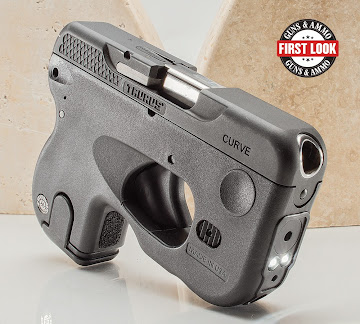 I’m going to say something that is probably going to get me laughed right out of the room.

The Taurus Curve is a brilliant pistol design.

For those of you who know me, I want to assure you that I’m not being the slightest bit glib or sarcastic.

Many of my peers in the industry—the vast majority of whom are far better shooters than I—think that the Taurus Curve may be the worst handgun ever to be brought to market. To them I say, “heck, it isn’t even the most horrible handgun brought to market by Taurus.”

These critics are making, I think, the mistake of thinking of the Curve as they would a traditional handgun, marketed to and purchased by a traditional shooter... 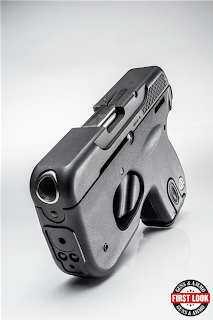 They are looking at the qualities that they would look for in a gun, based upon years of experience as shooters, with dozens of firearms through their hands ... They look for accuracy, reliability, durability, simplicity, quality, mantainability, and support.

...Frankly, whether the Curve is practical or it works for self-defense is utterly irrelevant. It isn’t going to be shot anyway... What matters is if the Curve will sell, and as Taurus has already proven with the stunning success of the Judge family of .45 Colt/.410 revolvers, they know how to market and sell tons of handguns that industry experts feel are absurd.

...The Taurus Curve is a gun designed to look like a fashion accessory and not a firearm, and is purposefully as chic and unoffensive as an iPhone...

But as absurd as they look, they may be the “gateway drug” to draw people into our gun culture.

I hope that Taurus is successful for that reason alone.

I disagree slightly with Owens in one respect. As CCW becomes more and more a part of American life (as it has for the last several decades), I believe this type of design -- one built around the needs of the typical American citizen, shooters and non-shooters alike -- will become widely adopted by manufacturers.

The typical firearm is difficult to carry without printing. The Curve fits a niche for that reason alone.

And at the rate CCW has been moving, I wouldn't be completely shocked if a federal Constitutional Carry law were enacted within the next couple of decades. A design like that of the Curve will, in my opinion, become standard fare for the civilian market.

A "federal Constitutional Carry law" already exists, it's the Second Amendment.
What part of "shall not be infringed" don't you understand?
You worthless fuck.

For what it's worth, potty-mouth, I agree entirely with you.

That said, your local DA probably does not.

"potty-mouth"
Really, that's what is important to you?
Our Republic is dead, the corpse is ruled by communist shitbags and we are enslaved, and your virginal ears are offended by the fucking profanity I typed previously.
Without question, you deserve the chains of your enslavement you dog fucking douche!
I almost forgot.
I don't give a FUCK what a DA agrees with, believes, eats for breakfast and shits for lunch, or says what the "law" is.
Fuck him!
Fuck him in the ear two times!

That reminds me...I gotta phone in a refill to the pharmacy.

Dude, it's not my virgin ears anyone's worried about. I'm trying to run a family blog here and plenty of kids check in.

Cav Med. Your impressive filthy language certainly buoys your argument. Now as far as your point goes, you can explain all of that to your cell mate. I am sure he will be impressed how you explained all of that to the police, lawyers and the judge and they still put you in the pokey.