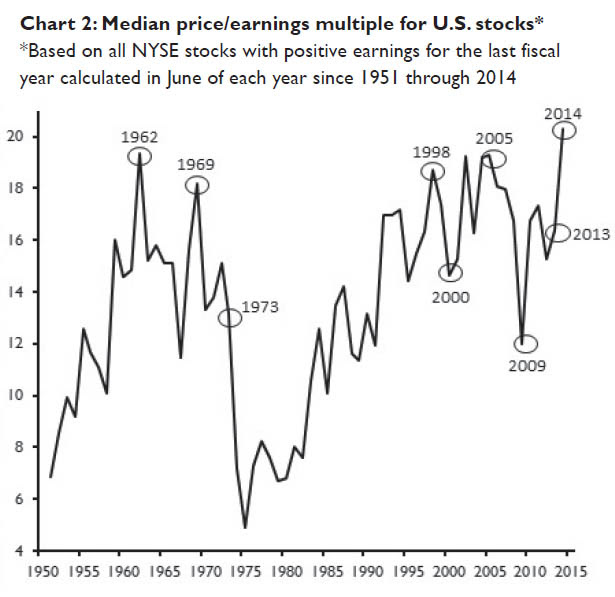 A: Not really. The main thing that has been legitimately “different” in the half-cycle since 2009 is that QE loosened the overlap and increased the delay between the emergence of extremely overvalued, overbought, overbullish syndromes and the onset of risk aversion among investors. The fact that QE-induced yield-seeking could induce such a sustained gap between these two was clearly a surprise to us. However, it remains true that once market internals and credit spreads indicate a shift in investor risk preferences, stocks are prone to abrupt losses – particularly when overvalued, overbought, overbullish conditions have recently been in place. This has been true even in instances since 2009.

Q: Why are market internals and credit spreads deteriorating?

A: Historically, the “catalysts” that provoke a shift in risk aversion typically become clear only after the fact. Our impression is that the plunge in oil prices and safe-haven Treasury yields, coupled with the rise in yields on default-sensitive assets such as junk debt is most consistent with an abrupt slowing in global economic activity.

Q: Is the market likely to crash?

A: We certainly wouldn’t rely on a crash, but frankly, we currently observe nothing that would prevent something that might feel like an “air pocket” or “free fall.” Crashes represent points where many investors simultaneously shift toward risk-aversion and too few investors are on the other side to buy the stock offered for sale – except at a sharp discount. They have tended to unfold after the market has already lost 10-14% and the recovery from that low fails. We would allow for that possibility, but our discipline is firmly centered on responding to observable market conditions as they emerge, and shifting as those conditions shift.