DENNINGER: How is it that no one is ever held accountable for the failures of government?

The Market Ticker points us to the catastrophic fail that is the Department of Homeland Security under the most feckless, criminally stupid, and corrupt transparent administration ever.

Homeland Security spent $50 billion over the past 11 years on counterterrorism programs, but the Department cannot demonstrate if the nation is more secure as a result. 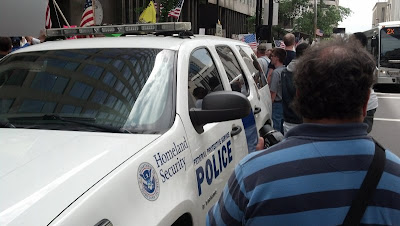 [Sen. Tom] Coburn also found that 700 miles of the nation’s southern border remain unsecured. The DHS is not effectively administering or enforcing the nation’s immigration laws, while only 3 in 100 illegal immigrants will ever face deportation.

The report also found that the DHS spends more than $700 million annually to lead the federal government’s efforts on cybersecurity, but struggles to protect itself, federal and civilian networks from the most serious cyberattacks.

The Department has spent $170 billion for natural disasters since 2002 because of an increased federal role in which the costs of small storms are declared “major disasters.”

In short, DHS has done nothing of use in its time on the planet.

It cannot demonstrate any impact in reducing terrorism.

It cannot secure the border.

It cannot prevent or deter hacking, nor has it improved security of the nation's computer infrastructure.

It has blown ridiculous amounts of money on storm damage repairs, but only because small storms are rapidly declared "major disasters" and thus the font of federal spending opens.

In short "DHS" does nothing other than waste money and funnel it to friends and family.

Yet here's the punchline:

Even with the grim findings, Coburn expressed optimism about the Department’s future if Congress acts swiftly to address the problems in the report.

If you had a department in a company that had five tasks and executed rationally on none of them you'd fire everyone involved. You certainly wouldn't allow it to go on for more than a decade before taking that action either.

But see, that's the problem with government. It never shrinks because nobody is every held accountable for failures nor do they lose their job when they either are incompetent or worse.

A corollary observation: government never shrinks, it always grows larger. Like some sort of tumor on the body politic, agencies expand in good times and bad. At best, incompetence and unaccountability are the hallmarks of most federal agencies. And, at worst, like the IRS under Steven Miller and Lois Lerner, government becomes weaponized against the very people who fund it.

Good Lord, if you'd of made this any more clear, a ["private," "privileged'"] preschool child could understand! In the "old days" they called it a "Behemoth."

I don't know about all the "cannot"s. Certainly, it "has not", but how much of that is because it hasn't been allowed to? All of the "cannot"s CAN be done, if the administration allows them to be done, and they are properly funded, and if the people involved are competent. The last one is the hardest one, as competent people are not drawn to government service (not saying that there a no competent people in government, just that competent people tend to prefer private sector jobs).

I thought it was common knowledge that the DHS was created as a jobs program. As such, it's given billions in tax dollars to the otherwise unemployable. I'd say that's a rousing success.