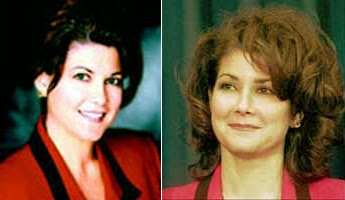 Gov. Jeb Bush, facing published reports about infidelity as he ponders re-election, dismissed rumors today of an extramarital affair with an agency head as an "outright lie" ...

...For months, talk in Tallahassee bars and state offices and Internet Web pages linked Bush with Cynthia Henderson, secretary of the Department of Management Services. Today's comment was his first public response to the rumors. On Thursday, a columnist for the Tallahassee Democrat reported about a rumor of an affair involving two high-ranking public officials but did not identify them. Over the weekend, two other papers — the St. Petersburg Times and the Orlando Sentinel — wrote about the rumors involving Bush and Henderson and said Bush had denied them...

...Bush originally appointed Henderson to head the Department of Business and Professional Regulation in January 1999. During her first year on the job, she faced questions about her ethics in running the agency on several occasions. Last September, Bush transferred Henderson to the Department of Management Services, a lower profile agency that oversees state facilities and insurance and retirement programs for state employees. Bush at that time said the criticism of Henderson was unjustified and had nothing to do with his decision. 
After allegations surfaced ahead of his reelection campaign, Bush helped Henderson acquire a position at a Miami consulting firm …

Cynthia Henderson, a prominent lobbyist and former agency head for Gov. Jeb Bush, obtained a temporary restraining order last week against her husband after he found her in bed with another man and allegedly threatened them with a crowbar, court records show.

...Henderson left state government in January 2003 and began work as a lobbyist for Tew Cardenas, a Miami firm.

But no proof, as far as I can see.

If we're going to wave away Liberal smears of infidelity against Henry Cain and Ben Carson because "there's not a scintilla of evidence", we have to wave away smears against the odious Jeb Bush for the same reason.

No, thank you. Not gonna play that game.

Sometimes you have to wrestle in the mud. And given that Jeb Bush is a plant -- with zero chance of winning a general election in 2016 -- i'm gonna bring up every single story i can to expose this fraud.

jeb is not a GOP candidate. He's a Democrat plant.

If he isn't, he might as well be with his support for Kommon Kore, and illegal immigration.

The Left-wing media is evidently gearing up early for the 2016 election. Let's hope they will investigate the story floating around about the Democrat Billionaire Donor who is said to have flown high-level Democrats to his island resort that was outfitted with upscale teenage prostitutes (or perhaps because of their age, "sex slaves" is a better description).

To A Nonny Mouse - It's HERMAN Cain, not Henry Cain.

Hope it's true with more to come. Get him out early.