It would seem that even the most corrupt Attorney General in modern American history (surpassing John Mitchell, in my view) couldn't find a reason to charge Officer Darren Wilson of the beleaguered Ferguson P.D.

Say, maybe it was the videotape of the "Gentle Giant" ripping off a convenience store and roughing up the owner. And all of the physical evidence at the scene. And the witnesses of every race that backed up Wilson's story. Et cetera. 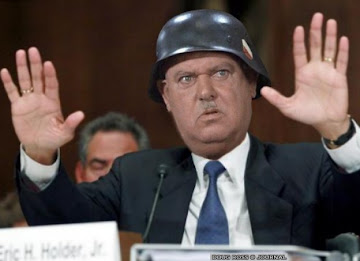 The Justice Department is taking the final steps toward closing the politically charged investigation into the shooting death of an unarmed black teenager in Ferguson, Mo., and clearing the white police officer involved of civil rights charges.

That would close the case in the death of 18-year-old Michael Brown. An investigation by the F.B.I., which is complete, found no evidence to support the charges against the officer, the officials said.

Of course, facts, logic, reason and evidence won't sway the Leftist race-baiters bent on fomenting division and violence. But enough about MSNBC.