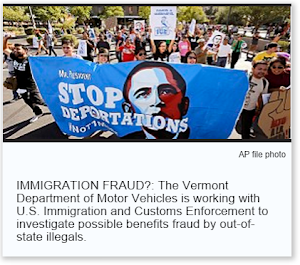 By Friday, however, the director heading up the investigation backpedaled regarding the number of known fraud cases, saying some suspicious applications may be legitimate after all.

“As we drill down into these investigations, we have found several that on the face would look suspicious because we have multiple people indicating the same address. In following through on those, we found that those were actually legitimate,” Glen Button, the DMV’s director of enforcement and safety, told Vermont Watchdog.

Button is asking his team of investigators to clarify details.

“Before I throw any numbers out to anyone, what I want from our investigators as they sort through these, is what are the actual number of frauds,” he said.

As first reported by the Brattleboro Reformer, subsequent in-person interviews revealed the applicants were from out-of-state. Upon questioning, some admitted to paying a middleman $2,000 in New York City for help obtaining the Vermont licenses. The state has since reached out to U.S. Immigration and Customs Enforcement for help with the investigation.

Murky details provided by the DMV are raising fresh questions about the scope of the investigation and possible fraud.

First, DMV officials say 40,781 driver’s privilege cards have been issued since the law went into effect in January 2014. Asked what percentage of the cards had been issued to undocumented immigrants, DMV Operations Director Michael Smith replied, “We do not have a way to differentiate citizen and noncitizen cards.”

It is also unclear how many DMV branches are being investigated.

Brendan O’Neill, coordinator at Migrant Justice, told Vermont Watchdog his group received complaints from migrants who had been investigated in Bennington, Rutland and Dummerston.

“We got phone calls from people who had applied for driver’s licenses at three separate locations and were at some point under investigation and that led to their being eventually turned over to ICE,” O’Neill said.

Button remain tight-lipped about investigations at other DMV locations.

“Right now, the focus is on transactions that occurred at the Bennington office. If there were fraudulent transactions conducted, it seems they were centered on Bennington,” Button said.

When asked about the out-of-state immigrants who paid $2,000 in New York City to obtain Vermont cards, Button said, “Those cases are still open and active. As soon as we have information … we can share accurate information.”

“While (I’m) disappointed by the recent wave of fraud in obtaining privilege cards, I’m not surprised. I, along with three other members of the committee, voted against the creation of these licenses for these reasons. My No. 1 concern was that we are enabling people who are here illegally to legally drive,” Brennan said.

Brennan cited other concerns, such as whether cards could be used to obtain welfare benefits. He also said the policy raises questions about insurance.

In 2013, Gov. Peter Shumlin signed a bill allowing undocumented migrant workers to obtain driver’s privilege cards. While the law is intended to help an estimated 3,000 immigrants living in Vermont, U.S.-born Vermonters have also applied for the cards instead of getting Real ID-compliant driver’s licenses.

Since the federal Real ID Act was passed in 2005, about 20 states have enacted laws refusing to comply due to objections to national identity cards. While Real ID-compliant licenses are currently optional in Vermont, in two years all U.S.-born Vermonters will be required to possess one to operate a vehicle, according to information relayed by the Vermont DMV information hotline. (See clarification at end of article.)

Undocumented immigrants will continue to use driver’s privilege cards.

Unlike Real ID-compliant licenses, driver’s privilege cards are marked as “not for federal identification” and are limited to operating a motor vehicle. The cards also can’t be used to board federally regulated commercial aircraft, access federal facilities that require identification, or enter nuclear power plants.

Whether the cards are valid for other common identification purposes is unclear.

To obtain a driver’s privilege card, applicants must prove their identity and date of birth; provide a Social Security number, or letter declaring ineligibility for a number; and offer proof of Vermont residency and current residential address.

Leaders of Migrant Justice, who met with Smith and Chief Inspector Captain Drew Bloom to advocate for the migrants, said they were pleased with the response they received.

“It was a pretty good meeting. One thing I learned is residency fraud in a broad sense is something that all DMVs deal with for a variety of reasons. What I got is a picture that this is just one small piece of something that they’re always doing. Every state has systems in place to deal with residency fraud. It’s not limited to this new program,” O’Neill said.

Why not follow existing law - require anyone 'visiting' the U.S. who wants to drive here to get an 'international drivers license'.