Ah, Progressives! You really have to – well, not admire them exactly – but if not admire them then at least grant them a grudging respect for the tenacity of their beliefs. 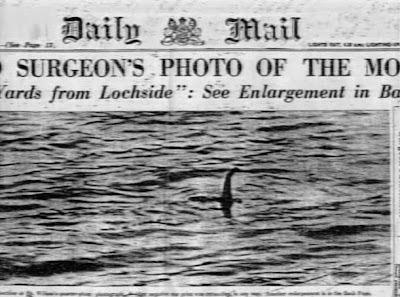 Unfortunately for them, the Socialist utopia is a Cryptid, which, according to Wikipedia’s serviceable definition, is “a creature whose existence has been suggested but has not been discovered or documented by the scientific community.” Here’s another example of a cryptid: it’s called the Loch Ness Monster. Like the socialist utopia, the Loch Ness Monster requires a lot of magical thinking.

For example, people who believe in the existence of the Loch Ness Monster will almost universally claim that it is the last of the Plesiosaurs – giant marine dinosaurs that definitely did exist millions of years ago. Like all dinosaurs, Plesiosaurs are air breathers. So in order to believe in the Loch Ness Monster, you have to believe that an air-breathing creature the size of a city bus lives under the surface of Loch Ness.

Now conservatives have beliefs too, but our beliefs are not based on what we wish to be true but what the evidence shows us to be true. We believe in the power of the free market, of individual effort and reward, and of the power of self interest to make life better for everyone. So we too believe that there are bus-sized creatures that breathe air and live under the surface of the water.

If you could print wealth instead of money, that would be a close-up of the Loch Ness Monster. But you can’t print Cadillac’s: you can only print what people use to buy Cadillac’s and the more you print the less it’s worth.

If war were a big misunderstanding that could be resolved though open discussion, well, that’d be Nessie in a tank at Sea World. But it’s not a misunderstanding. ISIS wants the world to pray to Allah five times a day, murder homosexuals, and keep women in tents, indoors. We don’t like that, so we’re going to have to fight those people.

Now Progressives, to be fair, say that the history of socialism isn’t just the Great Terror of the French Revolution, the purges and enforced famine of the of the Union of Soviet Socialist Republics; the mass starvation of maybe fifty million Chinese peasants in the People’s Republic of China; seven, eight, ten million more teachers, doctors, and musicians murdered in the progressive socialist takeovers in Vietnam and Cambodia; plus throw in a couple more million murdered by socialists – but progressive socialists! – in Cuba, El Salvador, Nicauragua and Venezuela, etc. and so on. They say Socialism can work without killing hundreds of millions of people, and to prove it, they point to places like Sweden.

For many years, this was the best single piece of evidence for the Loch Ness Monster. It’s called the “Surgeon’s Photograph.”

The Surgeon’s Photograph was a hoax. And decades after this picture was taken, some researchers reproduced the hoax, to show how it was done. And the shocking thing about it was the little model monster they used for the picture was only about this big: about the size of a duck decoy. And it’s only knowing that that you can look at the Surgeons Photograph and see what’s wrong with it: the waves are too big, and too smooth – they are shaped like ripples. They’re shaped like ripples because they are ripples: the best evidence of the Loch Ness Monster was so poor that without magical thinking people would have seen through it right away.

Now it is absolutely true that Sweden is a socialist country, in the real world. But “good” Socialism, as it exists in Sweden, is not real. It’s a plaster cast of socialism. Sweden has cradle-to-grave socialist benefits because for a while – and only a short while – because like the Loch Ness Monster, Sweden is a fake, for two beneath-the-surface reasons.

First, Sweden can afford to pay all of these benefits –“free” health care, “free” maternity leave, and so on – because the cost of defending Sweden is paid by American capitalist taxpayers. I don’t want to hear about the few jets or token troops Sweden might have. ALL of the money made by ALL of the Swedes could not pay for Sweden’s defense against the Union of Soviet Socialist Republics. Good socialism only exists because capitalists pay to defend the good socialists from the bad socialists.

Socialism is a Ponzi scheme. In order to pay for someone from cradle to grave, someone else has to do the work to come up with the tax money. As long as you have a pyramid – enough young people working – then you can afford these kind of benefits. And sure enough, that was the case for several decades after World War 2.

A stable society – not a pyramid but just a column – requires about 2.1 births per woman: one to replace the man, one to replace the woman and point 1 to take the fire challenge on Facebook. That .1 belongs to Darwin – they’re not going to live long enough to have kids.

Sweden’s birthrate is 1.9. There are fewer Swedes every year. Norway is 1.9; Denmark is 1.7; Canada is 1.6; Japan is 1.4, and Spain and Greece are all 1.3. These social welfare states are dying. Turns out if the government gives people everything they need to live, they don’t seem to want to live anymore – not as a culture, anyway. They’re all dying – all of them – and their welfare states are propped up by importing workers from places like Yemen – where the birthrate is a robust 4.2. Unfortunately, these imported workers – many of them from Muslim countries, where they still do want to live – aren’t Swedes, no matter how hard Sweden tried to make them Swedes. So blonde Swedish women no longer feel safe going out in a mini-skirt. And for at least five years in Neighboring Oslo, Norway, the percentage of rapes caused by the Muslim minority was – 100%. All of them. As the brilliant mark Steyn said: demographics is destiny.

Bad socialists murdered at least 200 million people. Good socialists are committing suicide, and would have been extinct long ago without American capitalism to protect them from the bad socialists.

The Progressive utopia is the Loch Ness Monster of politics: a giant, air-breathing creature that never surfaces for air. Progressives claim to love it because of their morally advanced love of the poor, but the fact is, the reason they love wealth redistribution to achieve income equality is because other people’s wealth is being redistributed to them. It’s not morality. It’s laziness, envy and it’s stealing, and the history – the photographs – show that time and time again they will murder those who create wealth and steal it before they would, you know, go out and create some of their own.

( https://danieljmitchell.wordpress.com/2015/01/17/economic-lessons-from-scandinavia/ )
=== ===
[edited] The Nordic countries demonstrate that a big welfare state is “affordable” so long as countries are willing to accept less growth and so long as they are willing to compensate for high taxes and high spending with very pro-market policies in other areas.

And that’s definitely the case. The Economic Freedom of the World data shows that Nordic nations get fairly decent scores because they have very laissez-faire policies for regulation, trade, monetary policy, and property rights.
=== ===

Bill didn't show the reproduction rate of the US - wonder why not? Wasn't it Jeb Bush who said we need more immigration from Mexico because "who is going to pay for all the Baby Boomers' retirement?" Let's face it, demographics IS destiny and the USS America is sinking just like all the others. To Mr. Garland I would say, you sir are ignoring the fact that lassez-faire is not just incompatible with virulent Islam, but multicultural forces are actively undermining the weak foundation of Nordic societies. It is a shame to see the crosses on all those flags rendered meaningless. Time is not on their side.