How to get an A in journalism professor DeWayne Wickham's class

A noteworthy observation about the First Amendment from our tireless free speech advocate, Mark Steyn:

~This is an American journalism professor in the 21st century: 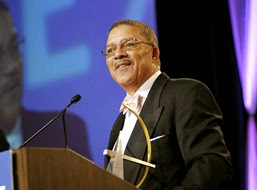 His argument is the classic Heckler's Veto. Because a not insignificant proportion of young Muslim men are bananas, they killed a bunch of people in Niger over the last Charlie Hebdo cover. Whether they even saw the magazine is unclear, but at any rate we should rein in free speech just in case the crazies are minded to kill any more people.

If you're in DeWayne Wickham's class at Morgan State and you'd like to get an A, why not threaten to kill him?

That's what Wickham's concessions on free speech do: Incentivize violence.

In addition to serving as a columnist and occasional television commentator, Wickham is a professor at Morgan State. Which tells you all you need to know about the state of higher education.