Wasn't it just a few months ago that Generalissimo Obama stated that Yemen was a strong, stable ally against terrorism?

So it was utterly predictable that this would happen: 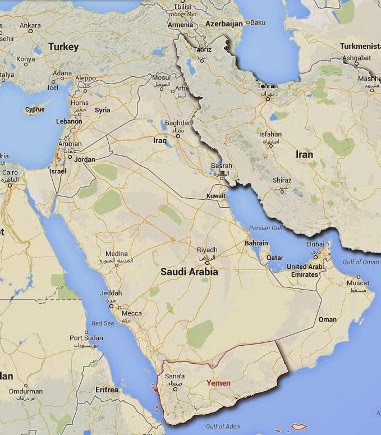 Following the gains of the Iran-backed Shiite Houthi rebels in Yemen, an official in the Iranian Army says that Iran’s borders reach today the capital of Yemen, Sanaa.

“Iran’s Borders don’t reach only the Shalamja region – the border area between Al-Ahwaz and Iraq – but to the Yemeni capital Sanaa.”

“The Houthis victory in Yemen was not an easy victory. This is not a normal routine event in the region, but this is a historic victory for the Iranian Islamic revolution.”

Zada also took the opportunity to attack the Gulf states and other Arab countries:

“The options of the Gulf states against Iran’s plan were reduced. There is no longer Saddam in Iraq or Bin Laden in Afghanistan. Iran can reach places which Arab leaders never dreamed of them, through the effect it has on the Islamic peoples rebelling against oppression in the Islamic world.”