And got a phenomenal advantage in terms of reducing fumbles by doing so:

The 2014 Patriots were just the 3rd team in the last 25 years to never have lost a fumble at home! The biggest difference between the Patriots and the other 2 teams who did it was that New England ran between 150 and 200 MORE plays this year than those teams did in the years they had zero home fumbles, making the Patriots stand alone in this unique statistic.

Based on the desire to incorporate full season data (not just home games, as a team theoretically bring “doctored footballs” with them on the road) I performed the following analysis:

I looked at the last 5 years of data (since 2010) and examined TOTAL FUMBLES in all games (as well as fumbles/game) but more importantly, TOTAL OFFENSIVE PLAYS RUN. Thus, we can to determine average PLAYS per FUMBLE, a much more valuable statistic. The results are displayed in the chart below. Keep in mind, this is for all games since 2010, regardless of indoors, outdoors, weather, site, etc. EVERYTHING. 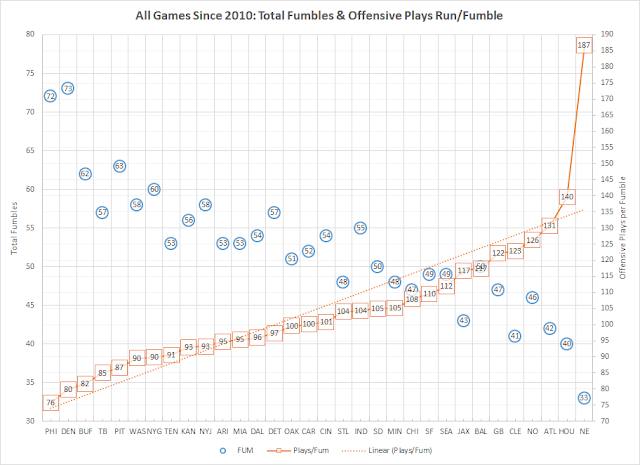 This needs to be investigated and, if it pans out, the Patriots need to have all of their post-2007 wins expunged from the record. This is really no different than roid-ragers like Bonds and McGwire juicing their way into the record books. It's crap.

at 9:18 PM
Email ThisBlogThis!Share to TwitterShare to FacebookShare to Pinterest
Labels: Sports

DR, their records won't be expunged - too much money has been made on the games over the past decade on the hoodie's crew.

but yeah, they definitely cheated - do a standard deviation calculation for the chart, and you'll find the patriots 187 - compared to the mean of 150.125 - is almost FOUR Standard Deviations from the mean!!! (source: http://www.calculator.net/standard-deviation-calculator.html )

I'm wondering if they will ever be held to account. to admit this would be almost akin to the Black Sox Scandal - and Goodell is no Kennesaw Mountain Landis.

think about when the Patriots beat the Rams - and turned in their tapings of the Rams final walkthrough - Goodell's office destroyed the tapes. No outside review, just internal.

Nothing to see here... just move along.

The noise died down, people moved on... until the next season, when the Patriots were fined a quarter mil, lost their #1 draft pick - and Hooded One was docked 500K.

Not exactly a light slap-on-the-hand that the original downplaying should have gotten, eh?

Nothing will be done - to admit otherwise is to cast a pall on every game the Pats have played since 2007, will stir the Pats-Rams superbowl up again, this time finding in Rams favor, maybe even officially stripping the Pats of that title.

As for people who lost big on that SB game? ya think, in this business where millions ( http://www.boydsbets.com/super-bowl-how-much-bet/ - see this for amount bet on each game in past 25 years ) are bet --- if BB is imprinted with cheating his way to a win, well let's just say that if I were his bodyguard, I'd take an extended vacation.

But it ain't gonna happen, DR - Goodell doesn't have the backbone for this. BB is riding on a knife-edge - so sharp that no one wants to destroy the game he has endangered with his cheating for fear of letting the whole truth out.

The problem is that this "Ironclad statistical proof" only proves that the Patriots have a record in fumbles/play that is unheard of. However, it fails to prove if they have been deflating balls since 2007. I agree that this is a very unique and interesting statistic but it is not something that you can use to prove this scandal. Maybe some more concrete evidence will show up, like a confession, or video.

"cheating s**theads"... What an opinion free statement based on concrete facts...

I am not trying to defend the Patriots, should they be proven guilty I am sure they will be given a punishment that the NFL deems fit. But until then, innocent until (actually) proven guilty?

Where did you get the quotation "ironclad statistical proof"? I did not write that, nor was it in the source article linked with the orig DR post. Don't quote me for something I never did, or be more explicit in stating that it's not my quote you're using. And try to include the article you did pull the quote from -

"... unheard of..." - yes, that's what being beyond 2 standard deviations, and in this case almost FOUR stdDev, would be expressed as. Because it's very unlikely (5% chance) for normal, random range of results to ping beyond two stdDev, and unheard of (0.01% chance) for a normal, random range of results to be almost four stdDev.

you know the global warming/hot-cold-climate change-consensus, shout-me-down-as-unbeliever (excuse me, "denier"...) crowd? They base their consensus on one stdDev. Maybe we need more democrats in the NFL front office looking at the numbers here - they'd be screaming GUILTY for a lot less standard than the above.

See fumble chart 2 of the orig Sharp article (embedded by DR). It has nice colors, zoned to reflect the standard deviations from the mean, both below and above. Displays what I'm trying to say better than I can say it, imho.

And you dismiss all the evidence.

This isn't a criminal case where Hoodie & Brady are innocent until proven guilty. BTW, please scratch video - we already know anything with video from Hoodie can be deemed as tainted.

The second thing right out the gate (wish I knew how to embed images in comments...) - charts showing Patriots fumble rate from 2000-2006 compared to 2007-2014. The former is very middle of the road, normal range of outcomes.

Why is the cutoff between 2006 and 2007 significant? Because the NFL changed the rule governing who would provide footballs for the 2007 season. Prior to that, the balls were provided by the home team. The rule change allowed for both teams to provide 12 footballs each for their games.

Btw, who lobbied for that change? I'm asking because I'm not sure if you will read the the above fumble article, so I'll be a sport and tell you:

Tom Brady lobbied for this rule change, so he could have more control over the balls he would be using on offense.

Above statement before the comma is in the article - post punctuation it's all me. Nice to see Tommy boy agree with my take on it, though... the article goes on further to use the Brady quote about "... some quarterbacks like them really broken in..." that's turning into a verbal albatross hanging just below his smiling face.

The money quote from above 3rd article:

Individual players who played on New England during the 2007-14 span and on other teams fumbled 46% less often ON the Patriots as compared to on their other teams (98 touches/fumble on NE, 67 on other teams).

Article goes further to show that Patriot players fumbled more often when they went to other teams than when with the Patriots. Guess those ball security lessons didn't stick much, did they?

1) I called them cheating s**theads and that's what I think they are. More and more people are using analyses like the above examples to come to the same conclusion. If you don't like that I do this - tough cookies for you.

Wonder if Tebow threatened to report them? Quarterbacks know when balls aren't 'right.'

Surprisingly, the rule change that preceded this, in 2006, changed the way game balls were provided. Prior, the home team provided all the balls. After, the teams each offered game balls to the officials for their acceptance. Meaning, that prior to that home teams chose the visiting teams' game balls. THAT was an interesting situation, where giving the visiting team lousy balls would likely result in retaliation.

But this previously affected away games the most. And more importantly, does this mean that the home team would not have been able to prepare their game balls differently prior to 2007?

I'm fairly certain that the League will not void those victories, since there is no definitive evidence. Statistical, circumstantial, but in the absence of officials reporting that they found Patriot game balls consistently deflated at halftime of games since 2007, you may want to reconsider your hypothesis.

As for the stats, well, there's a reason they play the games, instead of relying on statistical analysis to determine the winners.

i think there will be no reprisal, but would expect a more rigorous inspection of the balls at frequent intervals.

I think of an old Tom Clancy novel - his first, the Hunt for Red October, which illustrates this dilemma pretty well.

In that book, the Red October was a soviet sub so secret, made of special materials and a sub-sound drive which made the sub practically invisible. American sonar couldn't find it via the normal techniques ( familiarity with traditional soviet sub construction, noise detection of the soviet ssn engines while running ).

The American Sonarman, Jonesy figured out that there was something out there by listening for the absence of other normal sounds (sea, currents, marine life, echoes from underwater mountains, etc.). Specifically, he would hear normal sounds from the above, then a dampening a passing through these sonar returns which wouldn't last, only to return to normal.

Do an exercise now with me - start chanting "OMM, OMM" - after saying and hearing a couple of these, cover both your ears while continueing the chant through a couple of repetitions, then uncover them so you can hear yourself normally.

The Red October was your hands covering your ears and affecting the quality of sound from your chant.

The Red October could not itself be actively pinged, but where-ever it was, the mass of the ship would defract/dampen/change the normal sounds coming from objects behind it. Or more technically, the other objects would themselves emit sound, which the American sonar could still pick out -- and the soviet sub would be a sort of "black hole effect" between those sound sources and the American sonar picking them up.

It was that shadow (... against the normal range of sounds in the background...) which Jonesy picked up on... and which finally allowed the Americans to zoom in and ultimately catch the Red October.

But here's the rub - the Americans couldn't get a firing solution on the Red October's shadow.

This deflate-gate situation is very much like the above. We know something happened, the evidence supports that. We can "see the shadow". We can distinguish the difference of sounds by using our hands. We know something is not right.

Other experienced QB's have called out Brady as a Liar for saying he didn't know about this. And other anecdotal observations, albeit from professionals who've been around football all their lives and instinctively knew there was something different about those balls (witness the Colts safety who intercepted a Brady pass and remarked that it felt soft).

But we'll never get a firing solution on the Brady-Belicheck/Red October either. These liars, by definition, will never cop to this. And is there really a way to make them come clean? I think not; that's expecting a thief to be honorable about what he stole from the church. A thief is a thief, and a liar is a liar.

They'll have to be caught some other way, and maybe all this bad press/noise will help towards that.

Unlike others I will not be partaking in the 'festivals'.

I look at this as the 'Super Cheaters Bowl'.

Well for one you have belachunck who is the number one known nfl cheater for well over a decade.

And for two...you have carrothead who ran as fast as he could from the ncaa/usc because his cheating was found out...

So the 2015 Chumpionship will forever be known as the Cheater Bowl.