The question isn't: what could possibly go wrong electing a Marxist community organizer with no experience in the real world to the most powerful office in the world?

No. The question is: what could possibly go right?

A video uploaded to YouTube appears to show a large Hezbollah Brigades convoy transporting weapons, troops, and armored vehicles to the front to fight the Islamic State. 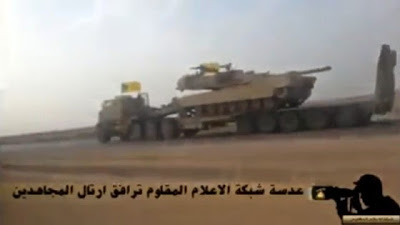 The Hezbollah Brigades is US-designated foreign terrorist organization that has been involved in killing American soldiers in Iraq.

At one point in the video, a transport truck is shown carrying an M1 Abrams tank. The Hezbollah Brigades' flag is flying over the tank and other US-made vehicles. The M1, which is the main battle tank of the US Army, has been sold to and utilized by the Iraqi Army.

The screen shot above marks the first evidence of Iranian-backed militias having M1 tanks at their disposal. It is unclear if the Hezbollah Brigades seized the M1 from an Iraqi Army unit that dissolved in the face of the Islamic State's onslaught, or if the Iraqi military gave the militia the tank. Several Iraqi M1s have been photographed after being destroyed by the Islamic State.

The Hezbollah Brigades, or Kata'ib Hezbollah, receives funding, training, logistics, guidance, and material support from the Qods Force, the external operations wing of the Revolutionary Guard Corps. The radical militia has joined the fight against the Islamic State in Iraq. In addition, other Iranian-supported Shia militias, such as Asaib al Haq, Badr Organization, and Muqtada al Sadr's Promised Day Brigades have played a prominent role on the battlefield. these militias have played key rolls in securing Amerli, Baiji, and Jurf al Sakhar, and are on the forefront of the fighting in Diyala province.

Bill Roggio has the complete story.

It can be perfectly summarized by this administration's choice of slogans for its foreign policy initiatives. You know, Leading From Behind. Smart Power. And, lest we forget, Reset!.

These leftist dolts are going to get one hell of a lot of people killed when it's all said and done.