Defense Spending: The venerable A-10 Warthog, designed to stop Soviet tanks, and the perfect weapon to "degrade and destroy" the Islamic State, as President Obama promised, faces a budgetary chopping block. 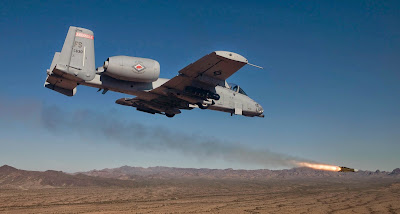 We have noted the irony of how Obama was going to war against the Islamic State with weapons systems he had scrapped, ending the production runs of the F-22 Raptor and Tomahawk cruise missiles. They were dismissed by the administration as relics of the Cold War even as Russia was rearming and trying to reassemble the old Soviet Union.

We've also mentioned the phasing out of the A-10 Thunderbolt, a close-support aircraft that entered service in 1972 and was designed to combat Soviet tank formations on a European battlefield.

Dubbed the "Warthog" because of its decidedly un-sleek profile, the A-10 has been found to be useful in another capacity in Iraq — attacking IS forces that don't want to be on the business end of the Warthog's 30 mm cannon as it flies low and slow over the battlefield.

As Iraqi News reported last week after an A-10 sortie against IS forces near Mosul: "The aircraft sparked panic in the ranks of ISIS and bombing its elements in spaces close to the ground." Such strikes also prove the value of such a low-maintenance aircraft built to take the punishment expected in close air support.

"Elements of the terrorist organization targeted the aircraft with 4 Strella missiles, but that did not cause it any damage, prompting the remaining elements of the organization to leave the bodies of the dead and carry the wounded to escape," according to the Iraqi report.

This is not surprising, since the A-10 can almost hover over a battlefield as it picks out targets for its 20-foot-long, 2.5 ton, seven-barrel Gatling gun that can fire 1,100 of those 30 mm shells. The titanium shell that wraps around the bottom of its cockpit makes it difficult to shoot down.

The U.S. sent the aircraft to the region in late November with the 163rd Expeditionary Fighter Squadron, a unit with the Indiana Air National Guard. The unit also provided close air support for air operations against the Taliban in Afghanistan.

On Jan. 15, Air Force Secretary Deborah Lee James pointed out that the A-10 had conducted 11% of all sorties against IS since August, despite the fact it was not deployed to the battlefield until November.

But it may be shot down soon by the budget-cutters. The Pentagon figures it can save $4.2 billion in operation and maintenance costs over five years by retiring all 283 of the Air Force's A-10s. It also believes the F-35, despite its unit cost and troubled development, can fill the need for close air-support need. Whether it can take the punishment the A-10 can is open to question.

A supersonic fighter pilot flying miles above the battlefield will not see enemy forces the way a Warthog pilot can. And his aircraft that costs 10 times as much will burn much more fuel in a shorter period than an A-10 designed to withstand ground fire the way an F-35 is not. Some have called the A-10 a flying MRAP, or Mine Resistant Ambush Protected vehicle, designed to protect troops in counterinsurgency operations.

Force requirements should be dictated by battlefield requirements, not budget restraints. Nor should we become so enamored of high-tech weaponry that we forget that sometimes only a hammer will do. The A-10 is such a hammer. Let's accept the realities of the threats we face and weapons we need, Warthogs and all.

The Air Force hates the CAS mission. That is what is behind the renewed effort to kill the A-10. The CAS mission isn't sexy. No flying at 40,000 feet at high speed turnin-and-burnin against another fighter. The CAS mission is known as air-to-mud in the Air Force. One caveat: those who actually fly the A-10, and understand that ALL aircraft are, either directly or indirectly, supporting the troops on the ground, LOVE the A-10. And of course, the troops on the ground love it, too.

They tried to kill it before Operation Desert Storm. But it was so useful, and did so many important missions that it wasn't designed for (scud hunts, SAM suppression, airbase destruction) because the planes that were SUPPOSED to do those mission couldn't take the damage dealt out by the Iraqis, that after that war the USAF general in command stated publicly that the A-10 wasn't going anywhere. They have since upgraded them all to A-10Cs, with full night vision capabilities, a digital cockpit, and advanced HUD (lifted from the F-16). Retiring it now would be stupid. I'd bet my life that the F-35 can't do the CAS mission nearly as well as the A-10. Unfortunately, the USAF wants to bet the lives of a lot of US Army personnel on that, and I believe that's a bad bet.

Perhaps the Army will do what was done last time this came up: ask Congress for a relaxing of the moratorium on the Army flying fixed wing aircraft.

Dems can buy a lot of votes with that money.