No matter who paid for Chris Christie’s ticket to the Dallas Cowboys vs. Green Bay Packers football game on Sunday, the New Jersey governor ran up the score on taxpayers. 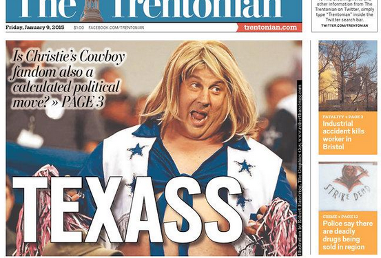 The travel costs of state police troopers assigned to protect the governor are 18 times higher than when Christie took office, a New Jersey Watchdog investigation found.

New Jersey spent nearly $1 million on travel expenses for its state police Executive Protection Unit during Christie’s four years and nine months as governor, according to documents obtained under the Open Public Records Act. Last year, Christie traveled out-of-state on more than 100 days while visiting 36 states, Mexico and Canada, primarily on personal and political trips that were not official state business.

The current average monthly travel costs to protect Christie for a single month are 50 percent more than former Gov. Jon Corzine’s entire final year in office, according to state records. For 2009, EPU’s expenses were only $21,704 – compared to $32,933 per month for the first three quarters of 2014.

Spokesmen for Christie did not respond to New Jersey Watchdog’s requests for comment.

The governor announced he will pay is pay for his own travel and ticket to the game in Green Bay. Last week, Christie acknowledged Cowboys owner Jerry Jones paid for him, his wife and their four children to fly to Dallas on a private charter jet as well as their VIP seats at the Jan. 4 game against the Detroit Lions – an admission that stirred controversy about ethics and gifts to the governor.

The dramatic increase in EPU travel costs coincides with the political rise of an ambitious governor considering a run for the White House in the 2016 election:

Details of how most of the money was spent remain a mystery.

More than 80 percent of EPU travel expenses were charged to an American Express card kept by the governor’s office, which billed the state police for repayment. Through public records requests, New Jersey Watchdog is seeking the monthly AMEX statements that detail specific charges for transportation, lodging, meals and entertainment.

The EPU travel expenses do not include the troopers’ overtime pay, data kept secret under a rule adopted by the Christie administration. Nor does it count the cost of state police vehicles and helicopters used to transport the governor and his entourage.

Records of the amount of overtime paid became state secrets through a 2011 regulation adopted by Paula T. Dow, Christie’s first attorney general. The rule assumes release of the information could somehow jeopardize the safety of the governor and his protectors if revealed.

A clue on the cost of EPU overtime surfaced last year when William Carvounis reportedly pleaded for “professional courtesy” during his arrest on shoplifting charges at a Cabela’s store in Pennsylvania.

“Carvounis said he was on the governor’s security detail,” Tilden Township Police Chief William J. McEllroy told New Jersey Watchdog. “He said he makes $140,000 a year, and he’s afraid of losing his job.”

If true, Carvounis received roughly $30,000 in overtime during 2013. The EPU trooper collected $94,000 in salary and $16,000 in non-overtime allowances, according to a state Treasury payroll database.

The number of troopers assigned to EPU is usually deemed confidential. But in 2007, the superintendent of the state police testified at a public hearing that “18 or 19 troopers” were assigned to the governor’s detail – and that number would soon increase by five officers.

Extrapolating those figures provide a rough estimate that troopers assigned to protect Christie could be earning upwards of $3.3 million a year – $700,000 a year in overtime pay on top of $2.6 million in salaries and other compensation.

State police officials deny they know how much manpower it devotes to protect Christie on his personal and political journeys versus his official state functions and duties as governor.

“Wages and overtime are paid without reference to the type or location of work being conducted,” stated Capt. Sherri Schuster in a certification filed in a recent lawsuit over public records. “Specifically, the payment of wages and salary will not distinguish between work conducted within New Jersey and work conducted outside of New Jersey.”

Nor do officials keep track of specific EPU travel expenses.

Regardless of the extra cost to New Jersey taxpayers, Christie decided to travel to another football game, along with his 24/7 state police protection.

“As a lifelong Cowboys fan, it’s hard to pass up attending a playoff game when you’ve been dubbed the team’s mojo,” explained spokesman Michael Drewniak on Christie’s behalf. “Not wanting to risk breaking the team’s 5-0 streak by messing with karma, Gov. Christie, his orange sweater, and his son, Andrew, will air travel to Lambeau Field this weekend to attend the game against the Green Bay Packers.”

On Sunday, the Cowboys lost their winning streak and their mojo. The Packers won 26-21.

Christie is positioning himself as the heir to Obama, not the antidote.