The Politics of Deceit and Delusion 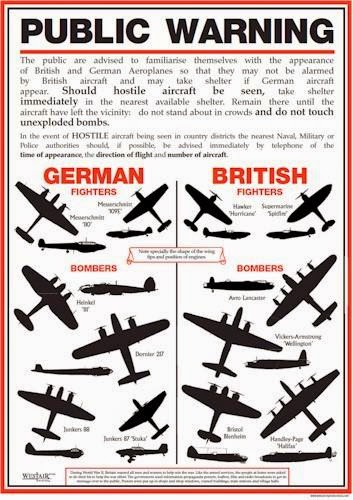 In the heady early days of WWII, fear of an enemy air attack on both East and West coasts was overwhelming. The U.S. government's response was to mobilize tens of thousands of civilian volunteers into an early warning system capable of discerning the number, type, and direction of any enemy aircraft formation over U.S. soil. The volunteers were given silhouettes of both enemy and American aircraft to study and commit to memory. In this way, individuals who could not tell the difference between a Mitsubishi and a Messerschmitt, were taught how to discern the differences between the two. The government also printed and distributed handbooks on both German and Japanese military forces, which detailed not only the uniforms and insignia of the enemy, but their motivation and psychology as well. This was very important, for as any first year cadet at West Point will tell you; enemy recognition is a vital component in the ability to wage war.

Fast forward almost 75 years. In his 2015 State of the Union address, President Obama acknowledged that one of his primary functions was to protect the American homeland and its people from attack. This was the correct thing to say, yet his administration seems to be going about it in a very ambivalent manner; using political correct terminology to re-define the war on terror.

Instead of the wars in Iraq and Afghanistan, it is now an "overseas contingency operation."

Major Hassan's rampage at Fort Hood is now classified as "workplace violence," and Islamic Jihadists are not terrorists at all, but "violent extremists." This latter interpretation places ALL acts of Islamic terrorism in the same category as Oklahoma City bomber Timothy McVeigh; completely ignoring present day realities as they actually exist.

In pursuit of this policy, the Obama administration has purged all references to radical Islam from governmental programs and training manuals currently in use. Even the Taliban has been reformed, as witnessed by their removal from the list of known terrorist organizations, and being given a new designation as "armed insurgents," whose goals and aspirations are somehow different from al-Qaeda. In this regard, the White House is in total accordance with al-Jazeera, which according to reports, just recently instructed its English speaking branch to desist from using terms such as "terrorist," "extremism," and "Jihad"; explaining that "one man's terrorist is another man's freedom fighter."

Of course, the "armed insurgent freedom fighters" of the Taliban could not have been aware of their forthcoming new designation, when they recently shot down 132 children at a school in Pakistan. Perhaps, they accidentally mistook the children for armed members of the Pakistani military, therefore, a legitimate target.

The Obama administration's contention in pursuing this policy is that it does not want potential "violent extremists" to join the Jihad, but these policies have had the exact opposite effect. Just how well this course of action has worked out over the last six years is now clear for all who choose to see it. Across a broad swath of the Middle East and Africa, radical Islam is on the march almost everywhere; aided and abetted by a policy of weakness, timidity, vacillation, and appeasement on the part of the current U.S. government and it's allies.

The list of countries affected by this tsunami of radical Islam includes France, Great Britain, Canada, Spain, Belgium, Nigeria, Algeria, Mali, Somalia, Iraq, Syria, Libya, India, Russia, Yemen, and of course, Israel and the U.S. In each instance of terrorist attacks in these nations, there is one common thread that runs through all: that the perpetrators of these acts are adherents to the teachings of radical Islam.

Given this scenario, the failure of the president to confront, or even acknowledge where the threat is coming from, causes consternation among our allies, emboldens our foes, and hampers any attempt to formulate strategy to defeat it. How can you fight an enemy you cannot even identify by name? How do you discern what motivates them and how can you agree upon a strategy to defeat them? President Obama's position on these issues cannot be comprehended in any rational sense. Giving him the benefit of the doubt, this can be interpreted as an extreme form of political correctness, carried to an almost insane conclusion.

Given Obama's reluctance to engage the enemy and his proclivity for political correctness, how might history have differed had he been president on December 7, 1941? The U.S. would probably apologize to Japan, because the explosion of the U.S.S. Arizona at Pearl Harbor caused a number of attacking Japanese pilots to suffer from burst eardrums.

There is no doubt that the American people are war-weary after more than a decade of conflict in Iraq and Afghanistan. No one wishes to see American troops re-introduced into any Middle Eastern combat theatre, but some degree of involvement beyond our current level seems to be inevitable. War has a way of finding you, regardless of your desire to avoid it. One of the major lessons of history is that wars are won through a combination of strength, unity, and resolution of purpose, coupled with a strategy designed to ensure victory. This is a lesson the current U.S. administration has yet to learn, and one that we ignore at our own peril.