The following headlines have appeared in newspapers within the last 24 hours. This is not an inclusive list.

There are more. I just stopped listing them because I grew weary -- so weary -- of the physical labor associated with cutting and pasting.

All of the stories were marketed by a liberal "advocacy group" called Families USA .

According to Discover the Networks, Families USA is a member of the "Progressive States Network", which works closely with (you guessed it) ACORN and the SEIU. These ultra-partisan groups have truly one agenda: big government. 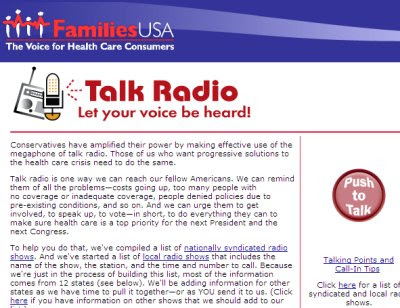 During his presidential campaign, then-Senator Obama spoke to a conference of Family USA activists and promised, "I am absolutely determined that by the end of the first term of the next president, we should have universal health care in this country."

Data from the Census Bureau debunks the lie continually promoted by the mainstream media of the legendary 47 million uninsured Americans:

This leaves approximately 20 million uninsured; less than 7% of the population. Why do some people choose not to purchase insurance? 60 percent reported being in "excellent health or very good health" and purposefully decided not to buy insurance. 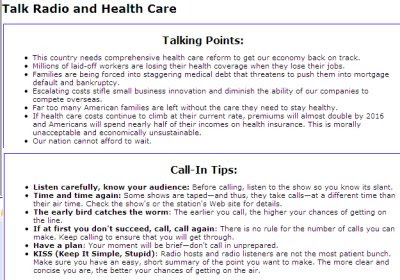 Further, 45% of the uninsured will have insurance within the next four months according to the Congressional Budget Office. Many are transitioning between jobs and purchase health insurance through their employers.

So what is the true extent of the "health care crisis" continually marketed by the big government leftists? The Kaiser Family Foundation, a liberal non-profit frequently quoted by the media, puts the number of uninsured Americans who do not qualify for current government programs and make less than $50,000 a year between 13.9 million and 8.2 million. That is a much smaller figure than the media report and is also subject to "the 45% rule", wherein that percentage will transition to new jobs within a four-month time-frame.

The mainstream media's willingness to act as an unthinking public relations arm for a tiny minority of left-wing radicals is truly despicable. But it's not unexpected for an industry destined, in large part, for the black hole of bankruptcy.

...I was struck by the promotion of this material by Families USA. When I was involved with [group] a few years ago, we checked out Families USA and found that they had almost no individual contributors to their non-profit organization. We obtained their 990 from IRS and found that we were totally funded by Big Labor and served as a "front group" in every sense of the term...

...Unlike the Heritage Foundation [for example], that proudly talks about grass roots financial support from 300,000 Americans, Families has no such support. All they get is a fat check from Big Labor.

ACORN, the SEIU and Chicago politics. What a wonderful web they weave, America.

Update II: Ace cuts to the heart of the matter.

Isn't it odd that the moment a hardcore liberal group sends out a study to the media, 200 headlines blossom?

I'm not sure that happens when Heritage or the AEI sends out a study.

I sorta think it doesn't.

Update III: JR points out that 60 Minutes -- which, as part of CBS, is nothing more than a discredited public relations arm of the Democrat Party -- aired a related story a few days ago. On 5 April, it featured "Bad Economy Leaves Cancer Patients Without Health Insurance In Dire Straits".

In October, just before election day, CBS Sunday Morning aired its own Obama infomercial. Entitled "Perils of American Health Care", it recited all of the Democrat talking points: from "47 million uninsured Americans" to "20,000 die annually because they don't get care."

Quoting all of the discredited statistics ("the U.S. is 75th in health care" or some such tripe marketed by the U.N.), CBS treats its viewers like hypnotized schoolchildren. Come to think of it, that describes most Democrats I know.

Funny how no one thinks to ask why patients aren't jetting to the UK or Canada when they require serious medical attention.


While I do declare, Charlotte... I think I'm blushin'. What an honor!

Update V: Writing at Red State, EPU ties the entire story together in beautiful fashion. It's a must-read.