Obama on SNL a Day Early: I Sent Thousands of Guns to Drug Cartels, But I Blame You for Mexican Crime Wave

You heard that right: the same man who gave thousands of military-grade weapons to Mexican drug cartels during "Operation Fast and Furious" now blames law-abiding citizens for gun violence in Mexico. 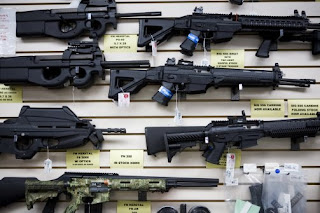 President Barack Obama told the Mexican people on Friday that he sees a “new Mexico” emerging, with a deepening democracy and growing economy, and that Mexico and the United States should be viewed as equal partners...

Drug-fueled violence in Mexico is not entirely the fault of the Mexican people, he said. Instead, the United States shares the blame because much of the violence is centered around the Americans’ demand for illegal drugs and the fact that guns are smuggled into Mexico from the United States.

“In this relationship there is no senior partner or junior partner. We are two equal partners, two sovereign nations that must work together in mutual interest and mutual respect,” Obama said.

A new book -- "Prisoners of the White House: The Isolation of America's Presidents and the Crisis of Leadership" -- describes how utterly insulated Barack Obama is from the real world:

"Obama has a cadre of idolizers around him, people such as Chicago friend and confidante Valerie Jarrett, and devoted adviser Denis McDonough, who is now White House chief of staff," Walsh says in a note about his book.

... "He follows sports, which gives him a break from the tedium and keeps him from obsessing about politics, his advisers say. He watches ESPN and frequently will relax by enjoying games on live TV, especially basketball and football.

"But staying in touch requires constant effort, and it's unclear whether Obama will, or can, keep up his current efforts amid all the time constraints, security limitations and pressures of office."

In other words, Obama is so completely surrounded by sycophants that no one objected when he floated the idea of giving a speech indicting his own actions.

Obama is a fond admirer of Adolph Hitler's 'big lie' theory, and practices it regularly -- aided by a completely corrupt media, and left unopposed by a cowardly and incompetent -- and probably equally corrupt -- opposition party.

The Obama Administration has become a long running Broadway musical for America, and to think, we can watch it free every day for 3 1/2 more years. They are printing like crazy there but I couldn't believe the last scene with Eric flagellating the States and lying to Congress. The action sequences with the Secretary of State killing Citizens in Benghazi was so-so but I really liked the props when Barry killed Osama, and his speech afterward was awesome: it just felt good.

The Fast & Furious undertaking was a key part of Obama's attempt at a fear campaign against private firearms. That campaign is still in progress. Its strategists are hoping for another Sandy Hook or Aurora to boost its prospects with...and I can't shake the suspicion that if one doesn't come to pass "naturally," they're not averse to manufacturing one.

The Bama is a US crime wave.

If he's not lying, he's acting as if he were an innocent observer AND he gets away with it thanks to the state-sponsored media.

the United States shares the blame because much of the violence is centered around the Americans’ demand for illegal drugs and the fact that guns are smuggled into Mexico from the United States.

Says the guy who has admitted being a member of the Choom Gang. Dude is Pure Evil.