California's massive pension, education, and health care obligations -- to name but a few -- have mysteriously been omitted from the current-state budget analysis. Exhibit 90 jabillion of the fiscal insanity is a particularly crusty old bird named Dorothy Dugger, who has pulled off one of the more elegant (legal) ripoffs of the state's taxpayers.

With a gross salary of more than $333,000, BART's highest-paid employee last year wasn't its general manager, police chief or a worker who racked up gobs of overtime scrubbing grime from filthy train seats... [Instead it] was someone who did no work at all for BART in 2012: Dorothy Dugger, the agency's former general manager who resigned under pressure more than two years ago. 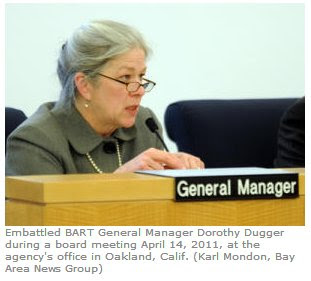 Under a lucrative retirement scheme, Dugger, 57, quietly stayed on the books, burning off nearly 80 weeks of unused vacation time, drawing paychecks and full benefits for more than 19 months after she agreed to quit in May 2011, according to an analysis by this newspaper. By remaining on BART's payroll, she accrued almost two extra months of vacation, while sitting at home drawing a six-figure salary for unused time off.

The months of extra pay were on top of the $920,000 that BART paid Dugger to leave after the agency's board botched an effort to fire her by violating public meetings laws...[she] reaped the astonishing windfall by cashing in more than 3,100 vacation hours, saved during her 20 years with BART.

[In addition, because] she was allowed to drag out her vacation-bank payments for months, Dugger received $138,000 worth of benefits, including pension contributions and medical insurance -- perks she would not have received if she had taken her vacation payments in a lump-sum check. Since she remained on BART's payroll, Dugger also received an additional $98,000 in cash, because she was still racking up vacation time and management bonuses -- even though she had no one to manage.

...Remaining on BART's payroll also added both time and money to the calculations on which Dugger's retirement is based -- increasing her pension payments by more than $1,000 a month for life. When her time on BART's books finally ran out in December, she began to draw a pension of $181,000 a year.

...Dugger said she was proud of her time with BART. Asked if her lucrative use of vacation time exposed a fiscal flaw in the agency, she said, "I think BART's track record on fiscal management is quite solid."

Thanks to the nefarious alliance of Democrats and public sector unions, California's budget woes haven't even begun.