Sarah Palin, along with millions of Americans who have been ignored, insulted and disenfranchised by their "representatives" in Washington, has had just about enough.

Please take a look at the [accompanying] article ... to understand how the amnesty bill the Senate passed yesterday is a sad betrayal of working class Americans of every ethnicity who will see their wages lowered and their upward mobility lowered too. And yet we still do not have a secured border. This Senate-approved amnesty bill rewards lawbreakers and won’t solve any problems – as the CBO report notes that millions of more illegal immigrants will continue to flood the U.S. in coming years. 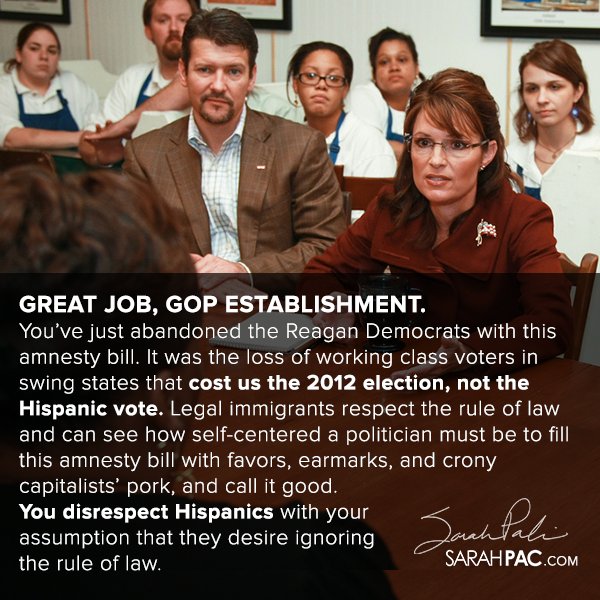 Great job, GOP establishment. You’ve just abandoned the Reagan Democrats with this amnesty bill, and we needed them to “enlarge that tent” of which you so often speak. It’s depressing to consider that the House of Representatives is threatening to pass some version of this nonsensical bill in the coming weeks.

Once again, I’ll point out the obvious to you: it was the loss of working class voters in swing states that cost us the 2012 election, not the Hispanic vote. Legal immigrants respect the rule of law and can see how self-centered a politician must be to fill this amnesty bill with favors, earmarks, and crony capitalists’ pork, and call it good. You disrespect Hispanics with your assumption that they desire ignoring the rule of law.

Folks like me are barely hanging on to our enlistment papers in any political party – and it’s precisely because flip-flopping political actions like amnesty force us to ask how much more bull from both the elephants in the Republican Party and the jackasses in the Democrat Party we have to swallow before these political machines totally abandon the average commonsense hardworking American. Now we turn to watch the House. If they bless this new “bi-partisan” hyper-partisan devastating plan for amnesty, we’ll know that both private political parties have finally turned their backs on us.

It will then be time to show our parties’ hierarchies what we think of being members of either one of these out-of-touch, arrogant, and dysfunctional political machines.

The country is nearing a breaking point. Palin knows it. You and I know it. Millions know it.

What the Republican leadership does next could well set the stage for a political sea change.

Great summary, and I was feeling the same thing, a sense of moment. Palin hit the sweetspot, said what millions have been feeling but needed to hear from a public figure. And I think something changed today. I've been sharing my sense of this feeling, what the Greeks called "peripetaia," a turning point, and others have echoed it.

I have voted republican in every election since 1982. I have given my support and money to the Republican Party as well.

I will never vote republican again if this passes. I won't vote democrat, but I'll be hanged if I'll cast a vote for the booger-eating morons that are indistinguishable from the donkeys.

Nobody cares what this washed-up quitter thinks or says. Go ahead and fracture the GOP and it's a guarantee that the only elections you'll be able to win will be for local dog-catcher.

How's your Messiah doing these days?

I mean, how's your favorite political figure in the history of the world doing these days?

Sarah Louise Heath Palin is one of the very few figures in America who could overturn our political order by her personal force alone. Should she announce that it's time for conservatives to abandon the Republican Party, abandon it they will...and a new, conservative party will arise within months, if not weeks, to challenge for the support of the majority of the United States.

I hope she does it. I want to live to see the men who've collaborated in the ruination of the Land of the Free cast down by their own actions and reduced to laughingstocks. It's no worse than they deserve.

I also resigned from the GOP after 6 decades of voting conservative.

C4 is a powerful explosive. Guaranteed to flush the District of Corruption, Cronyism and Collusion sewer.

They said the same thing about Marion Barry; he actually broke laws and went to jail.
She's not fracturing the GOP, the GOP is distancing itself from its constituent base.