HILLARY 2016! Clinton's office said to have covered up Pedophilia, Hooker and Drug Scandals in State Department

NBC News reports that a State Department whistleblower has alleged an organized cover-up of a series of scandals inside then-Secretary of State Hillary Clinton's massive, bloated operation.

A State Department whistleblower has accused high-ranking staff of a massive coverup — including keeping a lid on findings that members of then-Secretary Hillary Clinton’s security detail and the Belgian ambassador solicited prostitutes. 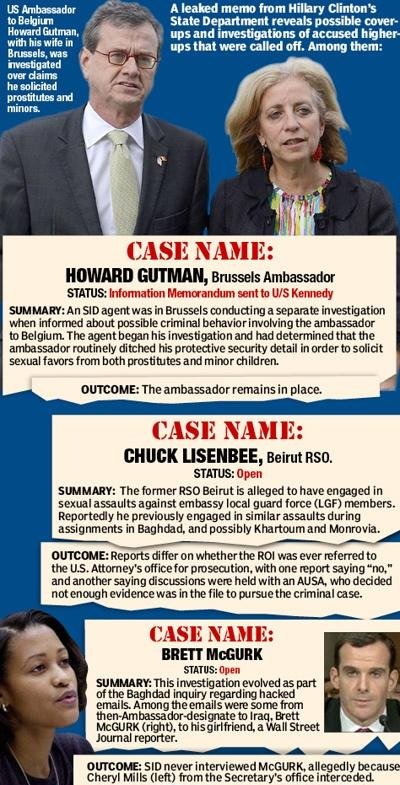 A chief investigator for the agency’s inspector general wrote a memo outlining eight cases that were derailed by senior officials, including one instance of interference by Clinton’s chief of staff, Cheryl Mills.

Any mention of the cases was removed from an IG report about problems within the Bureau of Diplomatic Security (DS), which provides protection and investigates crimes involving any State Department workers overseas... “It’s a coverup,” declared Cary Schulman, a lawyer representing the whistleblower, former State Department IG senior investigator Aurelia Fedenisn.“The whole agency is impaired..."

Among the bombshell findings:

* A DS agent was called off a case against US Ambassador to Belgium Howard Gutman over claims that he solicited prostitutes, including minors... Undersecretary of State for Management Patrick Kennedy ordered the investigation ceased, and the ambassador remains in place, according to the memo... Gutman was a big Democratic donor before taking the post, having raised $500,000 for President Obama’s 2008 campaign and helping finance his inaugural.

* At least seven agents in Clinton’s security detail hired prostitutes while traveling with her in various countries, including Russia and Colombia... Investigators called the use of prostitutes by Clinton’s security agents “endemic.” ... According to the memo, members of the Special Investigations Division (SID) approached the agent who was probing “and reportedly told him to shut down the four investigations...”

* The case in which Clinton enforcer Mills allegedly intervened centered upon Brett McGurk, Obama’s nominee to be US ambassador to Iraq... McGurk’s expected nomination fell apart after a computer hack exposed his racy e-mails and an extramarital affair with Wall Street Journal reporter Gina Chon... According to the memo, the SID “never interviewed McGurk, allegedly because Cheryl Mills from the Secretary’s office interceded...”

* The document states that a security officer stationed in Beirut, Chuck Lisenbee, allegedly engaged in sexual assaults against local guards...

...[The whistleblower], who retired in December, has been threatened by State Department officials with criminal charges.

London's Daily Mail also notes the possibility of an "underground drug ring operating near the U.S. Embassy in Baghdad."

Benghazi, the video lies, and the cover-up of a pedophilia scandal notwithstanding, @hillaryclinton is a super-qualified candidate for 2016

One other reaction comes to mind, which must be repeated in a shrill, screechy voice: WHAT DIFFERENCE DOES IT MAKE???

Hillary will not let sexual misconducts thwart her political ambitions, as evidenced by her failure to abandon her husband, William "BJ" Clinton while he was a philandering Governor and President: She's not going to start now, regardless of whatever level of involvement she may have in this State scandal.

A woman callous and cold enough to scream 'what difference does it make' leaving her employees to die without lifting a finger is unfit to lead. Add to that that the was fired due to her dishonesty and lies during the Watergate affair is not surprising; she is a carpetbagger of the worst kind never achieving anything on her own. 'The vast rightwing conspiracy; the 900 FBI files taken from the IRS blackmailing her husbands opponents among all the other criminal behavior on her part and, too numerous to mention - she should not even think about running for president. Then again, this is Hillary Clinton.....

Looking at that pic of Gutman's wife, I can understand him seeking female companionship elsewhere. For that matter, looking at HIM I can see where she might have the same problem.

But I draw the line at seeking it with children.

Remind me: What exactly were Hillary's actual accomplishments in her 4 years as Secretary of State?

I can't think of a single one. I can't even think of a claim to an accomplishment that anyone has ever made on her behalf.

I don't think we will have to worry about HIllary---she'll be too old, and if she couldn't beat OBAMA, she can't beat ANYONE in the primary

Hallmark of Mrs Clintons leadership, it happened in Kenya. Amb. Gration was about to clean up the same type of mess in Nairobi. He found out how bad it was in East Africa. The corrupt CIA blocked using ACS Chief John Bush and other mid level peeps.. Same type of stuff thanks for sharing these facts. Its amazing how this crap gets swept under the rug on purpose.