THE RUBIO-SCHUMER SHAMNESTY BILL: Why Gun Owners Should Be Very, Very Concerned [GOA]


As you probably know, the immigration amnesty bill is on the Senate floor.

This is a status report on where we are, and we will attempt to give you regular follow-ups over the next two weeks.

For starters, why should gun owners care about immigration amnesty? 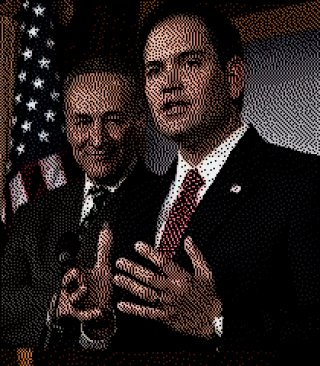 First: It will add up to a net 8.4 million anti-gun voters in the next 13 years or so. This could make comprehensive gun control and confiscation inevitable within our lifetimes.

Second: Victory feeds on itself; but so does defeat. If anti-gun Senator Chuck Schumer passes this bill out of the Senate with a strong bipartisan majority, he has already said he intends to bring gun control back by the end of the summer. Obama would emerge from the fight reenergized to take away your guns.

Third: If people get used to having to have the government's permission to get a job -- even to clean your house or mow your lawn -- it will be a lot harder to fight universal background checks and gun registries.

Fourth: There is the concern that the bill will create a de facto National ID card. In a Saturday New York Times article entitled, “Fears of National ID with Immigration Bill,” some in Congress have openly worried about the “potential for another sprawling data network that could ultimately be the equivalent of a national ID system.” Gun Owners of America has long opposed anything that smacks of this because of the danger that such data collection poses to gun owners’ privacy.

Here's where we are:

Most Republicans -- in our opinion, foolishly -- "threw the vote" on the motion to proceed to the bill. It would have been better to have an early show of force, but this is not the end of the world.

For the last week, the Senate has been debating Grassley and Cornyn amendments which would require border security before illegal aliens could get legal residence and/or a green card.

Why is this important?

In 1986, Ronald Reagan signed the Simpson-Mazzoli amnesty bill. The supposed trade-off was that illegal aliens would be granted amnesty, but illegal immigration would be stopped. 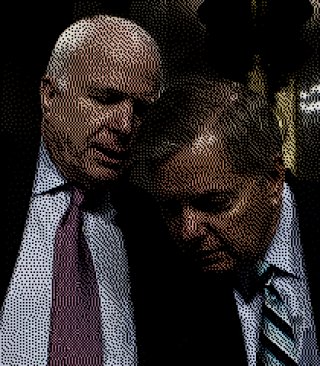 Illegal aliens were, in fact, granted amnesty. But, fueled by this first round of amnesty, 12 to 20 million more illegals flooded into the country. The border was never secured.

Now, Chuck Schumer is telling Marco Rubio, that this new bill will grant amnesty, but, in return, secure the border. But when Grassley and Cornyn offer amendments to require border security before amnesty, what does Schumer say? In effect, "border security is unachievable, so Schumer's supposed wonderful amnesty program would never happen under that condition."

Huh? Isn't this tantamount to saying that Schumer is lying to Rubio? Besides, as the DHS, ICE, IRS and NSA scandals suggest, Obama cannot be trusted to obey the law, once he's gotten his 8.4 new anti-gun voters.

But there will be follow-up votes on more anemic "border security" measures which will supposedly be the "candy" to pick up the votes necessary to send this bill from the Senate with 70 or more votes. If that happens, it will be harder to stop in the House.

Supposedly, these "poison candy" amendments are being considered by Senators like Tom Coburn and Bob Corker.

ACTION: Contact your Senators. Tell them the anti-gun amnesty bill needs to be plucked up by the roots without trying to sweeten it with phony "border security" measures.

Click here for a pre-filled form letter you can send instantly.

Imagine the resources expended against every gun owner who said, "come and get me" who then proceeds to lay agents out like cordwood and expand his perimeter. What? Call in the drones? I think the Goobermint will negotiate with the malcontents, perhaps give them a reservation, or maybe 20 macres and a horse.
Nothing to lose here, Barry made us all serfs.

The connection between the amnesty bill and the anti-gun agenda, given by the information presented in this article, seems week at best. It is based on “this-may-happen-in-the-future” (you’ll be surprised how many Hispanics are pro-gun) or victory feeds on itself (liberals will bring their anti-gun agenda again and again to congress win or lose) is not a connection at all but a supposition. I am a gun owner and will fight for my rights to own a gun. But please don’t push a no-gun related, extreme right, political agenda as an anti-gun issue without real proof (suppositions are no proof). All you do is push moderates gun owners into the liberal camp and almost guarantee another victory for the Democratic Party next election. Now that democrats are finally showing their true extreme-left intentions there is a good chance for republicans to win more seats in congress. If republicans respond by going even farther to the right they may negate that chance.