MEANWHILE, IN GUN-FREE CHICAGO: 7 Dead, 30 Wounded So Far This Weekend

These people are going to be in so much trouble when they get caught.

Seven people were killed and at least 30 others were shot in violence that plagued Chicago over Father's Day weekend. 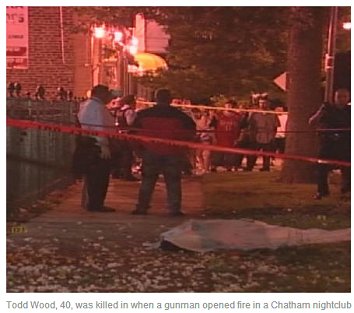 Five of the fatalities and 11 other shootings occurred overnight Saturday leading into Father's Day, including the fatal shooting of a 16-year-old boy.

On the Southwest Side, five people were shot, one fatally, in two shootings in the Little Village neighborhood.

At 10:50 p.m. Saturday 21-year-old Ricardo Herrera was killed and two others were shot in the 2500 block of South Ridgeway Avenue, police said. The two injured were taken to Mount Sinai. There condition was not immediately know.

At 12:30 a.m. Sunday, an 18-year-old man was shot in the head, chest and shoulder in a drive by shooting that also injured a 22-year-old woman in the thigh near 31st Street and Pulaski Road.

The man was taken to Mount Sinai in critical condition, according to Police News Affairs Officer Mirabelli.
At 11:45 p.m. Saturday a 16-year-old boy was shot by a gunman on a bicycle in the 4100 block of West North Avenue, police said.

The boy tried to flee but collapsed a short distance from where he was shot... He was pronounced dead at Advocate Illinois Masonic Medical Center after sustaining gunshot wounds to the left arm and back, Mirabelli said... His death was ruled a homicide but police had no one in custody as of Sunday morning.

Just after midnight Sunday, someone opened fire in a nightclub in the Chatham neighborhood, killing one man and injuring three others... Todd Wood, 40, was killed in the shooting and three others were treated for gunshot wounds at area hospitals. One person is in critical condition, officials said... No one was in custody for the shooting as of Sunday morning.

As a commenter on NBC Chicago's website observed, "This is what three generations of federal handouts coupled with the land's strictest gun control laws looks like. This is the Democratic Party's vision for all of America."

at 11:37 AM
Email ThisBlogThis!Share to TwitterShare to FacebookShare to Pinterest
Labels: Crime, Democrats, extremism, Firearms, Obama

How's that blue social model workin' out for ya'

Hmmm...wonder how many people in ChiTown are going to get injured or killed when the Chicago Blackhawks lose the Stanley Cup Finals?