With the recent disclosure that the bureaucrats running Obamacare want to give your Personal Health Information (PHI) to various state and local organizations, I'm sure this kind of thing could never, ever happen. 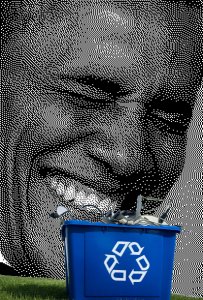 The Veterans Affairs hospital in Fayetteville says documents containing the personal information of nearly 1,100 veterans were found in a recycling bin two months ago.

The Fayetteville VA Medical Center announced Friday it's notifying the 1,093 affected veterans whose consultation reports from the optical shop were incorrectly placed in a recycle bin over a three-month period. The documents found April 17 contained patients' names, Social Security numbers, dates of birth, addresses and prescriptions.

Officials say there's no indication the information has been misused. But the hospital is notifying veterans who visited the optical shop between Jan. 11 and April 16 and offering them free credit monitoring services.

The hospital says the staff member who had been collecting the documents was retrained on what items should be shredded.

BUT DON'T WORRY, I'M SURE THE WHITE HOUSE WILL TREAT YOUR MEDICAL RECORDS WITH THE UTMOST RESPECT FOR PRIVACY, just as they do with your tax returns at the IRS.

Don't worry. When ObamaCare is fully implemented, instead of giving us free credit monitoring if our records are compromised, we'll just be able to get the NSA to monitor it for us. Easy peasy!