Today's declaration by President Obama that he would bypass Congress in enacting even more onerous regulations on power plants is, according to the Competitive Enterprise Institute, "Undemocratic, Bordering On Authoritarian."

President Obama’s climate agenda released today is being done without public or congressional support and is being pursued in this way because he knows the peoples’ elected representatives would never approve these plans, say experts at the Competitive Enterprise Institute. 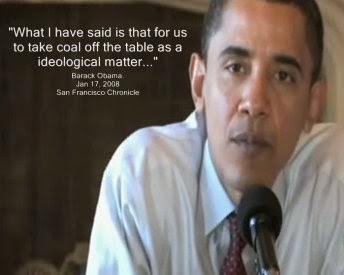 “Obama’s all-pain, no-gain agenda will cost jobs, drive up prices and have little effect on global emissions,” said Myron Ebell, director of CEI’s Center for Energy and Environment. “It is undemocratic, bordering on authoritarian.

“It confirms the Obama administration’s all-out war on coal, calls for more negotiations on a treaty the Senate will never ratify and displays an alarming lack of knowledge about the state of climate science. Congress should move immediately to defund as much of this as possible.”

... “He doesn’t want to go through elected officials because he knows if he put this plan in a bill and submitted it to Congress, it would be dead on arrival,” said Marlo Lewis, senior fellow in CEI’s Center for Energy and the Environment... all three elements of the president’s plan should be opposed. “Renewable energy is costly, intermittent and unreliable,” Lewis said. “If it weren’t a bad buy for consumers, Congress would not need to subsidize it in perpetuity, and 30 states and the District of Columbia would not need to mandate its use.”

...But the administration’s proposed CO2 emission limits for existing power plants pose “the biggest risk to consumer welfare and the economy,” Lewis said.

Christopher C. Horner, senior fellow at CEI and author of the 2012 “The Liberal War on Transparency,” research for which turned up the secret “Richard Windsor” email address of former EPA Administrator Lisa Jackson, said the proposal – which would drive a stake through coal-fired power plants nationwide – should come as no surprise...

“He warned us in the now-famous YouTube video he would shutter all existing coal-fired power plants and “bankrupt” anyone who tried to build a new one – even though they provide 40 percent of our electricity and much of our competitive advantage.”

Seeing as how coal remains the largest single source of electrical power in the United States, Obama's Castro-like declaration means just one thing.

He has declared war on electricity and, therefore, the livelihood of each and every American.

This idiot has declared war on our entire way of life, and declared it long before enough stupid voters to elected him.

He is a traitor.

Not only is coal the largest source of electric power in the USA, but the USA also has the largest proven recoverable coal in the world:

IMHO: If Obama wants "green" energy, he should build some new nuclear power plants...or, he should revive the USA's liquid sodium reactor technology of the 1950's...oops, sorry, he spent all our money so it looks like China will develop our technology first:

What is the correct temperature for the world? Since it is always changing, a stable temperature would be unnatural.