GENIUS: Senate Republicans pass yet another immigration bill that the Obama administration is certain to ignore

I know why the Democrats want Amnesty for illegals: it guarantees them a brand new voting bloc dependent upon their big government handouts. 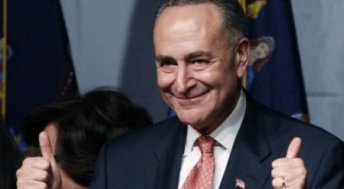 But perhaps the geniuses John McCain, Lindsey Graham, and Marco Rubio -- ostensibly Republicans, but in truth of unknown political affiliation -- can explain the following to me. Why would an administration that has gleefully flouted and ignored existing immigration laws decide to rigidly enforce this latest monstrosity?

Just minutes ago, the RINO establishment teamed with the hard left Democrat Party to pass the Corker Amendment that not one member of the Senate has read or understands. The vote was 67-27 to advance this Obamacare-like bill.

Here is the Hall of Shame: These are the 15 RINOs who betrayed the trust of the American people.
The American people are orders of magnitude smarter than their representatives: Rasmussen reports that only 28 percent believe the administration will secure the border if the Rubio-Schumer Amnesty bill passes.

WTF? Hatch? Does he have an evil twin or is he just another douche?
MM

I'm sure those big checks they received will make them feel better.