Gee, you'll never guess who got a photo op at James Gandolfini's funeral

Don't get caught between Chris Christie and a camera, because you could get pancaked into something resembling flesh-colored aluminum foil. 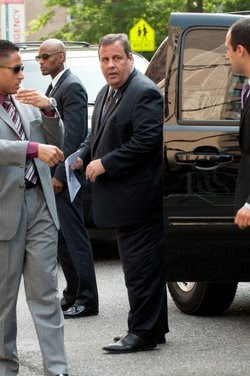 James Gandolfini's friends, loved ones and collaborators celebrated him Thursday as a teddy bear of a man who hugged a little too hard, an actor who committed so intensely to scenes that he once broke a refrigerator, and a man's man whose boyishness made him great.

Chase, as well as Gandolfini's wife and friends, spoke in remembrance of the actor, who died of a heart attack last week at 51. He recalled shooting a scene in which Gandolfini slammed a fridge so hard it broke -- and then complained about the dark places he had to go for the role of mob boss Tony Soprano...

Chase says he remembered telling Gandolfini: "Did it say anywhere in the script, 'Tony destroys a refrigerator? You destroyed the refigerator."

Later he addressed Gandolfini, as if reading him a letter: "Sometimes you tried too hard. That refrigerator was one example."