...in what must be just a startling coincidence and not a case of widespread espionage and theft.

China’s models of military planes at the Paris Air Show bear resemblance to U.S. aircraft, drawing attention to the rising concern in the Defense Department that the country is using cyber espionage to obtain sensitive defense technology. 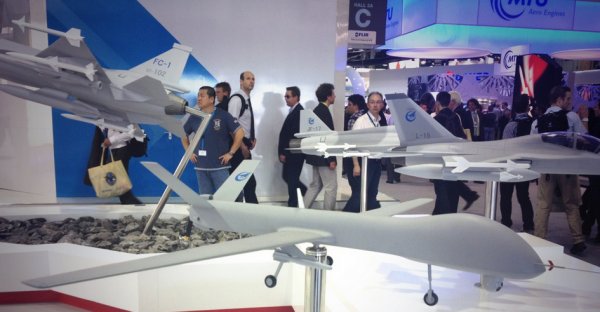 The state-run Aviation Industry Corporation of China had a large exhibit of military and civilian models of aircraft at the show, held outside Paris at the historic Le Bourget airfield... The display included three fighters and a drone: a single-seat version of the FC-1, a single-engine fighter built for the Pakistani air force and designated JF-17; a dual-seat variant of the FC-1 in development; the dual-seat, twin-engine L-15 trainer; and an unmanned system called Wing Loong.

The fighters looked like the F-16 made by Lockheed Martin Corp. and the drone bore resemblance to the MQ-1 Predator made by General Atomics Aeronautical Systems Inc., without the inverted tail. The Chinese drone is designed as a low-altitude craft that can fly up to 16,500 feet and loiter for 20 hours... Notably missing from the exhibit was any display of the J-20, China’s classified stealth-fighter program.

...Obama faced pressure to raise the [espionage] issue after the recent leak of a classified section of a Defense Department report showed that designs for the most advanced U.S. weapons have been compromised by suspected Chinese hackers. The list of weaponry includes the F-35 Joint Strike Fighter, the Littoral Combat Ship, and the Aegis Ballistic Missile Defense System, among others.

...the People’s Liberation Army, or PLA, considers the strategy of “information dominance” a critical form of defense against countries that it views as “information dependent,” such as the U.S.

Since the days of Bill Clinton, Red China has bribed, bought, and stolen their way into countless classified defense programs. The feckless Obama administration is just one in a long line of catastrophic national security failures certain to cost American servicemen and women their lives.


Related: Walking Back the Wildcat.