I have seen the future and ran away. 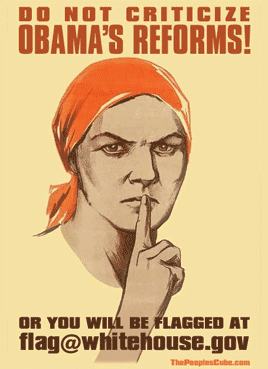 At first the move to America from the former USSR made me feel as though I had made a jump in time, from the stagnant depraved past into a distant dynamic future.

There was an abundance of commonly available futuristic contraptions, machines, and appliances that made everyday existence easier and more enjoyable. Less obvious but just as exciting was the media's openness: I no longer needed to read between the lines to know what was happening.

Most importantly, there was honesty, dignity, and respect in relations among people.

Only this time the productive, honest and self-reliant America is vanishing in the past, as we are quickly approaching the all too familiar future.

It is the future of equal poverty, one-party rule, media mooching, government looting, bureaucratic corruption, rigged elections, underground literature, half-whispered jokes, and the useful habit of looking over your shoulder.

It was nice living in America before it changed the course and followed Obama's direction "Forward," which, according to my compass, is pointing backward.

All of a sudden I find myself playing the role of a comrade from the future, helping my new compatriots to navigate the quagmire ahead of us.

Deprived of free political speech, Soviets had developed a culture of underground political jokes. I used to remember thousands of them.

Here's one of my favorites, dealing with the discrepancy between the official narrative and the everyday reality:

The six contradictions of socialism in the USSR


Already in America I discovered that most of my old Soviet jokes didn't work in translation. It wasn't so much the language difference as the fact that Americans had no first-hand knowledge of a totalitarian government, ideological uniformity, and shameless propaganda.

But that is changing. The more America "progresses" back to the Soviet model, the more translatable the old Soviet jokes become.

Let's see how an old Soviet joke can be rewritten into a new American joke.

The six contradictions of socialism in the United States of America


There's more where it came from - or where we're going, whichever the case may be.


Read more at The People's Cube

Ya know, the people running things are an utter joke.
Nothing but illegitimate political hacks and corrupt clowns.

Then there is the real entitlement class of psychopaths who have a delusion they are entitled to rule over me.

They think they are have power to rule by diktat. What a complete joke. I don't think so.

There is a plurality of good moral people in this great nation who know exactly how illegitimate the regime running things and their crooked ilk are.

I am one of those millions of fellow Americans who have withdrawn my consent.

Can you in that cesspool on the Potomac hear me?

You best hear me and my fellow Patriots good.

We are done with your lousy meddling in our lives, your corruption, and your lawless ways.

You have no legitimate power over me any longer.

I helped a woman and her child LEGALLY immigrate to the USA 15 years ago. Just recently she is referring to the USA starting to feel like he USSR.