BUT THEY'RE DOING IT FOR THE CHILDREN: Desperate Obama and His Sycophants Resort to Violent Rhetoric

“In 2008, he appealed to our higher aspirations. Now, he’s appealing to lowest fears,” Ryan said before an enthusiastic crowd in a recreation center at Marietta College, located on the Muskingum River on the border with West Virginia. “Just yesterday, he was asking supporters at a rally to vote out of revenge. Mitt Romney and I are asking you to vote out of love of country.”

• Valerie Jarrett: ‘After We Win This Election, It’s Our Turn Payback Time’ « : 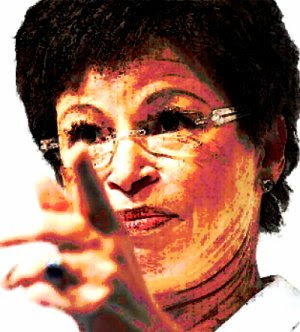 Openly declared as “Obama’s Brain”, and the figure whose second story West Wing office has been described by political insiders as the true Oval Office of the Obama White House, Valerie Jarrett is letting it be known that if Barack Obama secures election victory next week, there may be, quite literally, hell to pay for those who opposed him...

...The part that really stuck out to me was when I overheard the rep say that Jarrett told them, “After we win this election, it’s our turn. Payback time. Everyone not with us is against us and they better be ready because we don’t forget. The ones who helped us will be rewarded, the ones who opposed us will get what they deserve. There is going to be hell to pay. Congress won’t be a problem for us this time. No election to worry about after this is over and we have two judges ready to go.” She was talking directly to about three of them. Sr. staff. And she wasn’t trying to be quiet about it at all. And they were all listening and shaking their heads and smiling while she said it.

• Bill Maher Warns Romney Supporters: 'Black People Know Who You Are and They Will Come After You'.

These anecdotes illustrate just how far the hard left Democrat Party has fallen.

But that's what we could expect from a party that divides people by race, religion, gender, income, and any other arbitrary line that permits it to pander on the one hand while demonizing with the other.

We're all Americans. All of us.

This entire Democrat Party needs to be flushed from office on Tuesday. Vote angry, my friend.

I got a problem. Due to California's idiotic new election law, I have only Democrats to vote for in several positions, they having won the top two counts for their office, beating Republicans.

I have NEVER voted for a Democrat and don't intend to start now. Yet in some cases, there is a lesser of two evils.

I hate to taint my record but there are some people I'd prefer to lose.

Like RINOs, I would recommend voting for those who you think you can influence. Mitt Romney is going to be a lot easier to push in a conservative direction than Barack Obama.

If you only have two radicals to choose from, I'd write in yourself!

Those comments sound very much like Germany in the 30's after Hitler was "elected". Will there be a "crystal night" if Obama gets re-elected with the Republicans as the target? Sure sounds like it.

The Jarrett comments are pure, undiluted, Alinsky. When, not if, they lose do not expect them to drop the Alinsky either. They will move on to illegal subversion of Mittens' government no doubt.

Jarrett is the "Mommy" figure Ovomit relies upon in his life.

It is established fact that BO obeyed her command to NOT mount his Bin Laden attack repeatedly http://dailycaller.com/2012/07/29/obama-canceled-bin-laden-kill-raid-three-times-valerie-jarrett/

Valerie Rasputin Jarrett needs a swift kick - out the door, with her "boss"

11D alyI am amazed at everyone calling this violent. Do you not know of the violence threatened against our President during the campaign? Nooses and trailers filled with figures representing authority hanging.

You teabaggers are sick individuals.
Just for the record President Obama kicked Mittens sorry ass.And the first thing Mittens did was cut off campaign credit cards, leaving his people stranded.

Now that is real integrity, fitting a President. WAKE UP.