And isn't this precisely what we've come to expect from the modern Democrat Party, with its increasingly authoritarian bent? 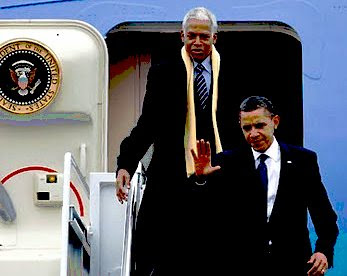 Rep. Hank Johnson (D-Ga.) says, “corporations control the patterns of thinking” in the United States and that the Bill of Rights to the Constitution should be amended so that the government is given the power to restrict freedom of speech.

"We need a constitutional amendment to allow the legislature to control the so-called free speech rights of corporations," said Johnson... “They control the patterns of thinking ... They control the media. They control the messages that you get. So, you are being taught to hate your government--don’t want government, but keep your hands off of my Medicare by the way. I mean, we are all confused people and we’re poking fingers at each other saying, well you’re black, you’re Hispanic, immigration, homosexuals. You know, we’re lost on the social issues, abortion, contraception.

“And these folks," Johnson said, "are setting up a scenario where they’re privatizing every aspect of our lives as we know it. So, wake up! Wake up! Let’s look at what’s happening. We need a constitutional amendment to allow the legislature to control the so-called free speech rights of corporations.”

The modern Left is as far from classical liberalism as one could imagine.

These men are Statists: interested only in centralizing ever more power and in consolidating that power with fewer and fewer masterminds in Washington. These are the kind of men that our country's founders despised and feared.

They are would-be despots who worship unlimited government, who respect neither checks nor balances, and blatantly violate the Constitution at every opportunity.

I wonder what America's breaking point will be? By that I mean, when will have the circle of liberty constricted around the average American's throat sufficiently to waken the sleeping giant?

Keep in mind that the "brilliant" Hank Johnson once said, in a congressional hearing, that he was concerned that adding more troops to Guam would cause the island to "tip over."

We aren't talking about Einstein here.

'Statists?' Doug, you're about as far off as you can be.

The appropriate term is 'fascist.'

Isn't this theo same ass hat that was worried about the island flipping over because here were too many people on it?

You forget that the first thing with a RAT is TO TALK ABOUT IT. It's a principle, no matter how alien - it gets talked about. This begins to give it legs and soon more RATS will talk about it and that gives it a measure of credibility as a topic of discussion. We know where it goes from there, they begin to make new laws and when they do they will expect we will be the only ones forced to obey it.
Resident Evil is in the White House and all the talk radio, all the conservative sites and all the opinionators have not made a dent creating accountability let alone in stopping these breathless power grabs.
Hey, I know, let's talk about it some more and validate the fact that a human being can learn to get used to anything.

No joke, Einstein, this guy would not make it on the Little Rascals.