TRANSFORMING A GARDEN SHOVEL INTO AN AK-47: When shovels are outlawed, only outlaws will have shovels

Please be aware that hiding in your garage, there may be dozens of Killy, high-clip-capacitated, school-penetrating, children-hating, Assault Weapons of mAss Destruction! Please send this message to all your libtard friends to make sure that they call 911 when they encounter anything that looks like a shovel. Thousands of hardware and home improvement stores are selling AKs through the "shovel" loophole to anyone!

...When I was driving through VT backroads this fall, I stopped at a gun shop and seeing a few ARs made me feel gay enough to visit a dilapidated "antique barn" where farmers sell authentic sh-- from the local dump to idiot tourists. When I smelled a much stronger odor of cow sh--, I saw this shovel and the image of the AK handle came to my exasperated mind. Flustered old dude was suspicious of a comrade in a BMW, on less traveled gravel roads of VT, who barely spoke English and needed a sh-- shovel "for my trunk" but let it go for $2. That's the best $2 I ever spent, closely behind that one time in Montreal - but that's another story... 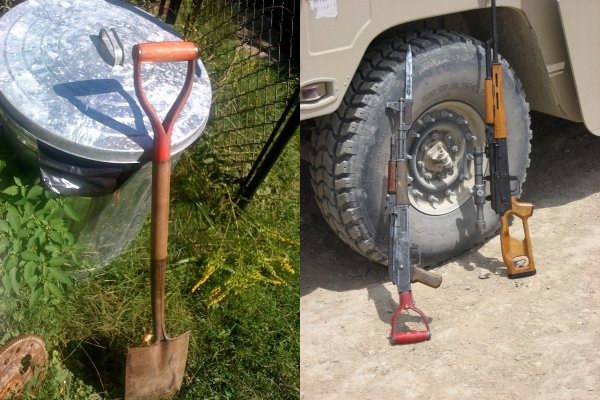 ...Well, this is not the end, it's a beginning, because one night I was drinking with the shovel and contemplating what to do with it. It's funny, when you are sober, you can' understand how a shovel can share with you a delicious drink of vodka. So I said to shovel, I will re-unite you with your handle and we had another round of drinks to celebrate! ...

Yes, Boris demonstrates that you can build an AK-47 with a $2 shovel that you bought used at a yard sale.

Cue the protests at hardware stores nationwide by the permaleft.

at 10:38 AM
Email ThisBlogThis!Share to TwitterShare to FacebookShare to Pinterest
Labels: Firearms

Does the notion of "Shovel-ready jobs" come to mind?

$2? It's a bit more for the tools and equipment that he uses. Plasma cutters and arc welders aren't free.