HEY, DEMOCRATS: I'll listen to Warren Buffett's tax hike ideas when he decides to PAY HIS OWN DAMN TAXES

Warren Buffett's marketing efforts for Barack Obama's class warfare campaign are despicable on two fronts. First, they do nothing to address the country's catastrophic deficit problem:

A search at the Associated Press’s national website on Warren Buffett’s last name at about 5 p.m. ET returned two recent items which are still present there. Each item (here and here) mentions the Obama Fan of Omaha’s idea to “impose a minimum tax of 30 percent on income between $1 million and $10 million, and a 35 percent rate for income above that.” Neither mentions the pathetically small amount such a tax would raise while seriously impacting the ability of high income earners who own or run businesses to expand them — or in some cases causing them to shrink.

It’s the same at other establishment press outlets. Two recent New York Times items found in a search on Buffett’s full name (here and here, the latter item being Buffett’s own op-ed on Sunday) fail to note how little money Buffett’s proposed tax hikes would raise. So how little is “little”?

Buffett hasn’t been entirely consistent in his expressed suggestion. Earlier this year, he wanted a rate of 30%, while his recent Times op-ed suggests 35% for those earning over $10 million. James Pethokoukis estimated in April that the amount which would be raised would be about $5 billion — “although experience suggests that it won’t raise even that much.” The government currently spends $5 billion about every 12 hours, and runs an $5 billion deficit in less than two days.

You read that right: even if the truly wealthy didn't find ways to get their money out of the U.S. or otherwise evade these taxes, the amount raised by Buffett's brilliant plan wouldn't pay for two days of this massive, bloated federal government's deficit spending.

It also turns out that Buffett is hardly a model citizen when it comes to paying his own taxes:

It Turns Out Warren Buffett Is A Master Of Avoiding Taxes 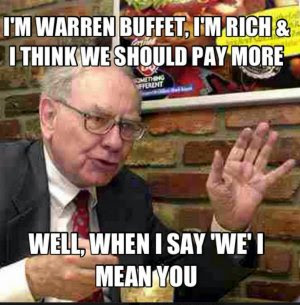 Lately, Warren has been a shill for Obama. Over and over again, we hear how good ole Warren “wants” to pay more taxes and thinks his wealthy buddies ought to follow suit. “We aren’t taxed enough,” he says. Well, let’s take a closer look at just where Warren stands when it really comes down to paying his taxes...

There are two recent cases where Warren has done everything possible to AVOID paying taxes that he actually owes. The first case involved a 14-year fight over the dividend-received deduction that was finally settled with the IRS in 2005. The second case is still pending after 10 years in which he owes just over $1 BILLION in back taxes. Both of these cases are well-documented and you can satisfy yourself simply by using Google to inquire as to the voracity of these assertions. Also note the timeframes of 14-years and 10+-years; not exactly a haphazard hissy fit. While you’re at it, you might also ask yourself “why” Warren says one thing in public discourse while he practices the exact opposite in his business and personal life. Is not that the definition of hypocrite?

...Buffett is now at the center of another tax controversy, according to The Wall Street Journal. His recent decision to invest in Bank of America “represents another tax-avoidance triumph for the Berkshire chief executive,” the Journal wrote in an editorial ... “With the exclusion for Mr. Buffett and his fellow shareholders, Berkshire will enjoy an effective tax rate of 14.175% on the $300 million in dividends it will receive each year from Bank of America,” the Journal reported. [Remember, his secretary pays a higher tax rate?].

Look up "crony capitalist" in the dictionary and I'll bet you see a lithograph of Warren Buffett staring back at you.