A MILLION ISRAELIS HAVE 15 SECONDS TO FIND SHELTER: Any other country would have turned Gaza into the Bonneville Salt Flats

"If an alarm is sounded, people in southern Israel—1 million people—have 15 seconds to find shelter. I don’t know if any of your governments will accept this reality. I cannot accept this." -- PM Netanyahu 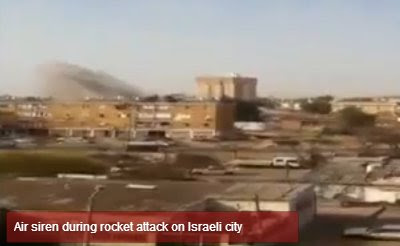 Some simple facts about the ongoing Blitzkrieg from Gaza:

Watch the videos. It's like the Battle of Britain being reenacted in Israel.

If I were commanding the IDF, my calculus would be very simple: we will level block by block, town by town, city by city, until the attacks stop.

No other country on Earth would tolerate a million citizens fleeing for bomb shelters dozens of times per day.

It's time to draw a line in the sand. And if that line happens to be as wide as Gaza, so be it.

It all started when Israel fired back. (said sardonically)

Bibi is beginning to deal with them as we speak, and it even looks like an Israeli ground incursion is in the offing.