Well, this is mildly disturbing.

[These maps,] created by Princeton Professor Robert Vanderbei, takes a slightly different approach. It’s one of the few that shows the action in three dimensions.

Like some other maps we’ve seen, Vanderbei’s displays votes county by county, eschewing solid reds and blues for a palette of purples, graded according to how each county voted. But what makes Vanderbei’s visualization unique is his use of the z-axis to show how many people voted in these counties. In metropolitan areas, columns shoot up like neon skyscrapers; in flyover country, it’s typically more of a low-rise affair. But the effect is powerful: At a glance, Vanderbei’s map shows not just how the country voted, but where it voted, too... 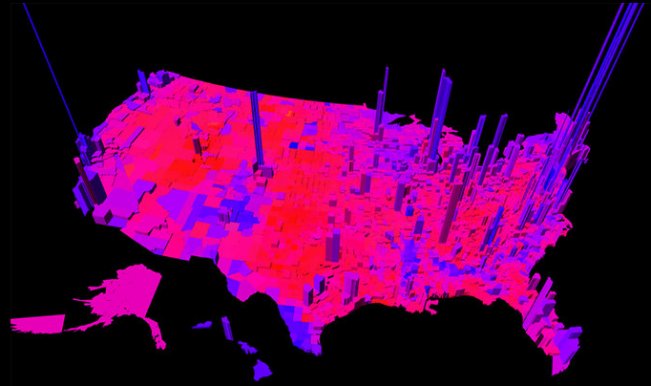 And that means cities. The democratic lean of places like New York City, Los Angeles, Philadelphia, and Boston shouldn’t be news to anyone, but seeing the results like this gives you a sense of just how overwhelming the number of voters really is in those densely populated urban centers. And so long as those towers stay blue, it’s why you won’t hear about states like California or New York being in play anytime soon. 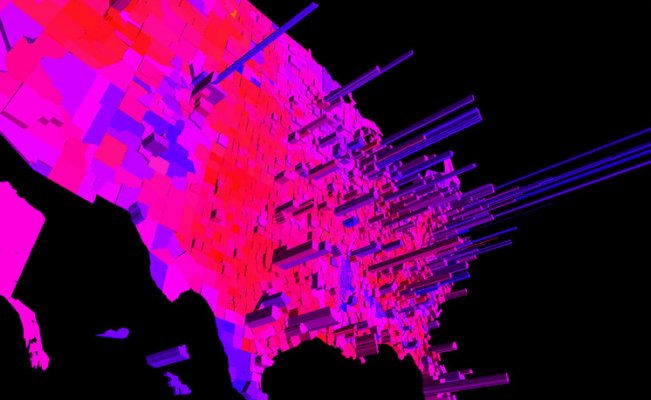 Vanderbei, a professor of operations research and financial engineering, made his first "Purple Area" visualization after the 2000 election. He had been reading USA Today when one of the typical "county-by-county, red-blue" graphics caught his eye. That map, he says, "made me wonder why anyone would paint a county-by-county map in such a way as to imply that a county has cast its vote for one candidate or the other. I live in a county that went about 52% republican and 48% democratic in that election. Painting the county red seemed highly misleading..." 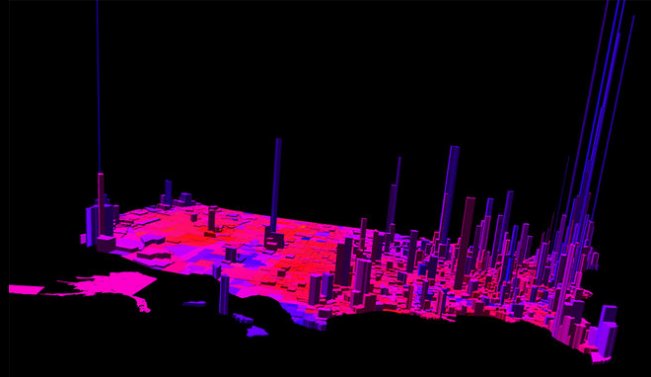 ... my biggest takeaway was that the Obama campaign’s ground game in Colorado must’ve really worked. Denver’s the country’s 23rd most populous city--smaller in population than Houston, Dallas, El Paso, and Fort Worth to the south in Texas--but its impressively tall (and solidly blue) stack represents a key source of votes in what was a hotly contested state.

You can view the entire gallery here.

I was looking at a lot of images from that guy's site before the election. I was amazed at how big and blue the greater Denver area was in 2008. It's like finding an extra orifice in the corpus libertatus.