It’s not just a bad deal, this is really an insulting deal… Robert E. Lee was offered easier terms at Appomattox and he lost the Civil War. The Democrats won by 3% of the vote and they did not hold the House. Republicans won the House. So this is not exactly unconditional surrender, but that’s what the administration is asking of Republicans.

There not only are no cuts in this, there’s an increase in new spending with a stimulus – this is almost unheard of. I mean, what do they expect? They obviously expect the Republicans will cave on everything. I think Republican ought to simply walk away. The president is the president, he’s the leader.


They are demanding that Republicans explain all the cuts that they want to make. We had that movie a year and a half ago where Paul Ryan presented a budget, a serious real budget with real cuts. Obama was supposed to give a speech in which he would respond with a counter offer and what did he do? He gave a speech where he had Ryan sitting in the front row, he called the Ryan proposal un-American and insulted him, offered nothing and ran on Mediscare in the next 18 months. And they expect Republicans are going to do this again?

The Republicans are going to walk on this and I think they have leverage. Yes, for congressional Democrats it will help them in the future if Republicans absorb the blame because we’re going to have a recession. But Obama’s not running again unlike the congressional Democrats. He’s going to have a recession, 9% unemployment, 2 million more unemployed, and a second term that’s going to be a ruin. That is not a good proposition if you’re Barack Obama.

Former Speaker of the House Newt Gingrich said Wednesday that House Republicans should stop negotiating with President Barack Obama and congressional Democrats on the fiscal cliff, saying that by doing so, they give Obama all of the leverage in the talks.

“One of the things I would say to House Republicans is to get a grip,” Gingrich said in a speech at the Ronald Reagan Presidential Library in Simi Valley, Calif. 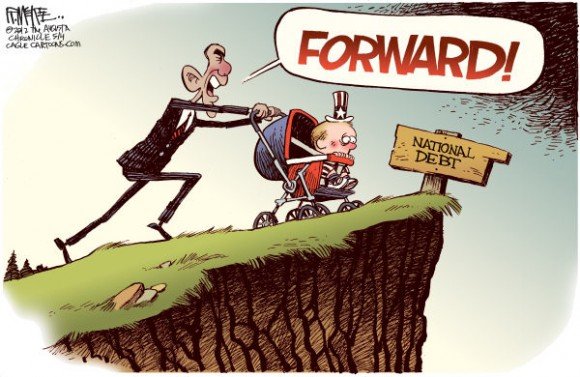 “They are the majority. They’re not the minority,” he said, enunciating the words as if explaining the concept to someone who did not understand it. “They don’t need to cave in to Obama; they don’t need to form a ‘Surrender Caucus.’”

...He also addressed the recent focus on Grover Norquist and his no-raising taxes pledge, which some Republicans have abandoned in recent weeks, calling it a “distraction.”

“I give Obama great credit for this. I have never seen anybody better at finding trivial distractions in order to avoid responsibility,” Gingrich said. 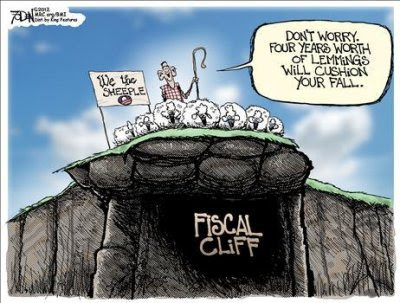 Part of Obama's transformation of America is wiping out the Republican Party. And anyone who fails to understand that that is also part of Obama's agenda at this moment, anybody who fails to understand that is really not paying attention and is too caught up in traditional conventional wisdom about, "Well, it was just another election. Well, yes, Obama won. Yes, we marshaled our forces, but we need to stand for pro-growth policies and all that rotgut." Yes, we do. There's no way we're ever gonna be tied to pro-growth policies if our fingerprints are on this coming disaster...

... The best thing to do is back out of this and let Obama and the Democrats have it and do what they gotta do. 'Cause that's gonna happen anyway. I don't know about you, but I don't want my fingerprints on this.

Obama has yet to make any serious offer -- a "balanced" offer, using his terminology -- and Republicans need to just walk away. Obama created the fiscal cliff; he created sequestration; he made his bed. Let him lie in it.

Let's say Obama offered a 10 to 1 spending reduction to tax increase ratio.
The end result would be no different than this, the tax increases would happen but the spending cuts would not ever come. They never, ever occur. Let's not deceive ourselves.

No matter what the Repulicans do they will get blamed for it..Ive said this over and over..go over the cliff shut it down.The takers have out voted the makers,there is no turning back now.for the issue to the states.

Let Oblahblah own this economy. He likes "sharing"? Fine...let's share the pain too...tax hikes for everyone! No Earned Income Tax Credits either. If the Dems want us to go over the cliff...then everyone goes. Full speed ahead.

Alan Reynolds, who is a very fine economist with CATO said recently that "Barack Obama doesn't understand economics, and apparently will not listen to anyone who does."This was not an idle remark. He really doesn't understand at all. Rahm Emanuel set up daily economics briefings for him, but he soon got bored and quit them.

He doesn't understand where money comes from,nor why the amount spent should be limited.There are cronies to be repaid, new businesses to support and a world to save from global warming. He must have more money, lots of money.

So what is the conventional wisdom? That Obama couldn't get everything that he wanted because of recalcitrant Republicans and that Obama is a moderate because he was able to compromise to get his legislation passed. Compromise with whom? How many Republican votes did PPACA get? And it passed? What compromise?

The fact that the Republicans couldn't communicate this message having had SIX YEARS to do so is nothing short of abject failure.

The Republicans are dead by their own hands and I say screw 'em. They're worse than useless, they're useful to the enemy.

The only hope we have is a quick and painful discipline. We need to pancake and we need to do it hard. We NEED the streets to erupt so that the threat can be exposed and eliminated. If we allow this to be "managed," we will find ourselves as boiled frogs, arguing amongst ourselves as to the exact moment the country failed.