HERITAGE FOUNDATION: How to f--- with Harry Reid's illegal nuclear assault on the Senate filibuster

You may have heard that the Senate Majority Leader -- a freakish-looking man named Harry Reid -- will likely attempt to violate the rules of the Senate to destroy the filibuster rule. Reid, of course, was a huge fan of the filibuster when he served in the minority. But, as always with the Marxist Left, the ends justify the means.

So if Reid wants to go nuclear on the filibuster and illegally shred decades of Senate procedure, a response in the form of some serious scoundrelry is in order. 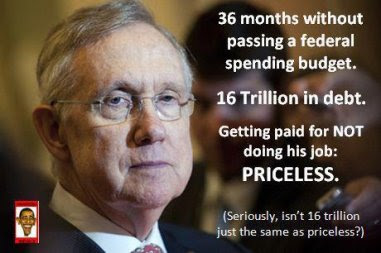 • A new two-thirds point of order against any infringement on the Second Amendment rights of all Americans. This would be subject to a simple majority vote under Reid’s theory. There is a pro-gun majority in the Senate today, and this might actually pass. It would be a great tool for conservatives to forever block reinstatement of the assault weapons ban in addition to any other gun-grabbing ideas.

• A new two-thirds point of order against any net tax increase on the American people as scored by the Congressional Budget Office. This would be subject to a simple majority vote and is part of the Senate version of the Balanced Budget Amendment to the Constitution supported by all members of the current Republican caucus.

• A new point of order to make Senators sign a consent form before a bill is passed by “Unanimous Consent” or “UC.” Many times, the Senate operates by waiving the rules with the consent of all Senators. Many times the bills passed are opposed by members, but they fear getting blamed for obstructing bills by forcing the Senate to abide by all the rules to pass a bill or confirm a nomination. This would put all members explicitly on the record supporting legislation that sneaks through the Senate under the radar.

As Heritage notes, these are just a few of the ideas that could be floated. Off the top of my head, I can think of a few others:

• Forcing any bill that funds Obamacare, the HHS or the EPA to face a six week public review period before a vote is permitted

You get the picture. Bring it on, Leftists.

Harry Reid is a disgusting little man with a Napoleonic complex and no idea of the Constitution. That Arizona foisted this jerk on us is unconscionable and we owe it to America to fight this loser on every level.
With all due respect.

I'm just amazed that this worm is still alive. It will be a miracle of the RINOs in the Senate stand up and fight.

Reid is Senator from Nevada. Don't put that douche-nozzle on us Arizonians.

How does he get away with being such a jerk? Unbelievable.

The following video about democrats and filibusters was too appropriate NOT to share with you:
http://hotair.com/archives/2012/11/27/supercut-hey-remember-when-democrats-loved-the-filibuster/