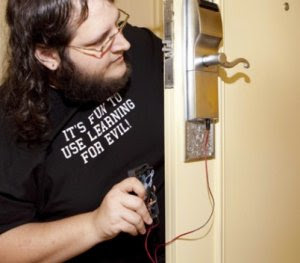 You may remember a vulnerability in four million keycard locks presented at the Black Hat conference in July. Hacker Cody Brocious showed he could insert a device he built for less than $50 into the port at the bottom of the common hotel lock, read a key out of its memory, and open it in seconds...

...Two months later, it turns out at least one burglar was already making use of that technique to rob a series of hotel rooms in Texas. The Hyatt House Galleria in Houston has revealed that in at least three September cases of theft from its rooms, the thief used that Onity vulnerability to effortlessly open rooms and steal valuables like laptops...

...at least two other hotels in Texas were hit with the attack. Onity has been criticized for its less-than-stellar response to a glaring vulnerability in its devices. The Hyatt says Onity didn't provide a fix until after its break-ins, forcing the hotel to plug its locks' ports with epoxy. And even now, Onity is asking its hotel customers to pay for the full fix, which involves replacing the locks' circuit boards.

Sebastian Anthony has a suitable and pithy response to Onity's, eh, carelessness:

The hack in its entirety is detailed on Brocious’s website, but in short: At the base of every Onity lock is a small barrel-type DC power socket (just like on your old-school Nokia phone). This socket is used to charge up the lock’s battery, and to program the lock with a the hotel’s “sitecode” — a 32-bit key that identifies the hotel. By plugging an Arduino microcontroller into the DC socket, Brocious found that he could simply read this 32-bit key out of the lock’s memory. No authentication is required — and the key is stored in the same memory location on every Onity lock... The best bit: By playing this 32-bit code back to the lock… it opens. According to Brocious, it takes just 200 milliseconds to read the sitecode and open the lock.

As for how Onity justifies such a stupendously disgusting lack of security, who knows. Generally, as far as managerial types go, securing a system seems like a frivolous expense — until someone hacks you. In non-high-tech circles, hacks like this are par for the course — usually, a company doesn’t hire a security specialist until after its first high-profile hack. For a company that is tasked with securing millions of humans every night, though, it would’ve been nice if Onity had shown slightly more foresight.

My advice: bar the hotel room door and secure it with a chair against the door jamb. Oh, and don't leave valuables in the room safe either. That's easily hacked too.