TRAMPLING INDIVIDUAL LIBERTY: The Hobby Lobby Letter Everyone Is Talking About

Editor’s Note: David Green is the founder and CEO of Hobby Lobby Stores, Inc., which is challenging the Obamacare contraceptive mandate. This letter is an excellent illustration of how unconstitutional, authoritarian, and centralized federal policies crush individual liberties. It is but one illustration of the amoral collectivism which is the hallmark of a nascent tyranny.

When my family and I started our company 40 years ago, we were working out of a garage on a $600 bank loan, assembling miniature picture frames. Our first retail store wasn’t much bigger than most people’s living rooms, but we had faith that we would succeed if we lived and worked according to God’s word. From there,Hobby Lobby has become one of the nation’s largest arts and crafts retailers, with more than 500 locations in 41 states. Our children grew up into fine business leaders, and today we run Hobby Lobby together, as a family. 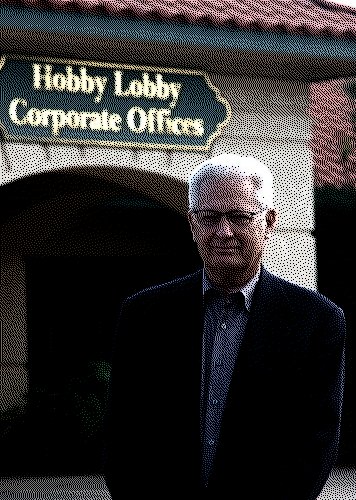 We’re Christians, and we run our business on Christian principles. I’ve always said that the first two goals of our business are (1) to run our business in harmony with God’s laws, and (2) to focus on people more than money. And that’s what we’ve tried to do. We close early so our employees can see their families at night. We keep our stores closed on Sundays, one of the week’s biggest shopping days, so that our workers and their families can enjoy a day of rest. We believe that it is by God’s grace that Hobby Lobby has endured, and he has blessed us and our employees. We’ve not only added jobs in a weak economy, we’ve raised wages for the past four years in a row. Our full-time employees start at 80% above minimum wage.

But now, our government threatens to change all of that. A new government health care mandate says that our family business MUST provide what I believe are abortion-causing drugs as part of our health insurance. Being Christians, we don’t pay for drugs that might cause abortions, which means that we don’t cover emergency contraception, the morning-after pill or the week-after pill. We believe doing so might end a life after the moment of conception, something that is contrary to our most important beliefs. It goes against the Biblical principles on which we have run this company since day one. If we refuse to comply, we could face $1.3 million PER DAY in government fines.

So, Hobby Lobby – and my family – are forced to make a choice. With great reluctance, we filed a lawsuit today, represented by the Becket Fund for Religious Liberty, asking a federal court to stop this mandate before it hurts our business. We don’t like to go running into court, but we no longer have a choice. We believe people are more important than the bottom line and that honoring God is more important than turning a profit.

My family has lived the American dream. We want to continue growing our company and providing great jobs for thousands of employees, but the government is going to make that much more difficult. The government is forcing us to choose between following our faith and following the law. I say that’s a choice no American – and no American business – should have to make.

The government cannot force you to follow laws that go against your fundamental religious belief. They have exempted thousands of companies but will not except Christian organizations including the Catholic church.

Since you will not see this covered in any of the liberal media, pass this on to all your contacts.

Thanks to: The HayRide.

What a joy to read. The degradation in this country has been terrible to watch and it's wonderful to see a company staying true to their faith. Thank you for fighting this terrible regime.

Exercise for the reader, perhaps?

I don't think that Hobby Lobby will win in the US Courts. The cold hard fact is that the Federal Government can require you to perform or not perform certain actions, even if such actions are against your religious or moral beliefs. And especially if you are engaged in interstate commerce, which Hobby Lobby surely is. The most recent precedent are the Civil Rights laws of the 1960s.

I believe that moslems are exempt from all aspects of obamacare. does this mean it is not a religion?

Thank you for fighting for your beliefs, and mine. We Christians are under attack by the devil and his minions.

I will start out by saying that I am a Christian and that I do not believe in abortions. I do not believe that you hire only Christians though, and so you cannot force those who do not share belief in God's law to keep God's law. Therefore what is the benefit to them if you force them to obey it? I do not see how that is sharing God's love or His Gospel.

Doesn't he trust his employees to make the right choice?

The employees can do what they want.

But they can pay for their contraceptives themselves.

He did not say anything about trying to control his employees beliefs. What he is referring to is the fact that his company would be fined $1.3 million per day, if they refuse to comply with the Obamacare mandate (tax).

Why should anybody that believes that abortion is murder be expected to pay for it? Seriously!

It is not a matter of enforcing God's law, rather allowing them to take full responsibility by paying for it by themselves.

Looks like this "letter" is a USA Today column by Mr. Green.