BUT IT'S ALL ABOUT FAIRNESS: 144,000 households, 1 percent of taxpayers, pay half of California's income taxes 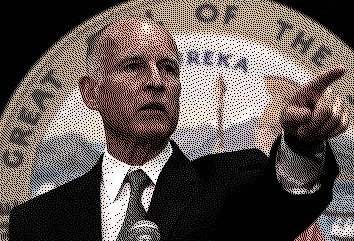 ...One of the more egregious aspects of Brown’s [Proposition 30] is the retroactivity of the income tax increase, which would apply to all income earned after January 1, 2012. [Imposition of] this retroactive tax hike makes it clear to businesses that if they want some semblance of certainty in tax planning, they must leave California. Campbell’s Soup, Comcast, and Samsung have been the latest to come to this realization; either shutting down facilities in-state or moving operations outside of California.

California residents already contend with one of the most progressive tax codes in the country. Not only does California have high marginal rates, those high rates kick in at relatively modest income levels. California’s middle class residents earning $48,000 a year, for example, pay a state tax rate of 9.3%. Millionaires in 47 other states don’t even pay that high of a marginal rate. However, one of the state tax code’s greatest flaws is it’s over-reliance on upper income households and the revenue volatility it creates, and that is a problem that Prop. 30 would further exacerbate.

As of 2010, the state relied upon 144,000 households, 1 percent of taxpayers, for 50 percent of total state income tax... [With Proposition 30's passage,] the top 10 percent of earners would be responsible for over 80% of the projected income generated - a fact that Gov. Brown and other advocates of the bill readily acknowledge.

California is destroying itself -- the U.S. is next.

That one percent makes 80% of the income, but only pays half the taxes. God forbid that rich people should have to pay a tax. I won't shed any tears for them.

That 1% might make 80% of the income, because they create 80% of the value in the economy! Look at how Silicon Valley has improved the lives of Millions of Americans..

Retroactive law is bad law, no matter what jurisdiction it is, or who is affected by it. This in itself should create a loophole large enough to drive a truck through, and a challenge before the courts should prove that. The problem with "lawmakers" is that most of them don't understand even the simplest factual underpinnings related to their business, let alone how to interpret social data and render "fairness" through legislation. Apparently, this is an even worse problem in LA-LA land than it is in DC land. Good Luck with your tax base, children.

Anonymous #1 will be crying plenty if a handful of those Bad Ol' One-Percenters (TM) move out of state. What percent should they pay? 80%? 90%? 100%? Tell us, do, since you are obviously an expert in fiscal policy.

So annoymous 1......exactly how much should the rich pay? Do they use more services than the rest of us? I dont think so. If what you want is FAIR, then everyone should pay the same amount no matter how much they make because those who dont pay are getting nothing but a free ride. I dont know why people like you seem to think that just because you are successful, you need to anti up more. This is ridiculous.

Reaganite Independent said...
This comment has been removed by the author.
4:14 AM

Anonymous 1 - I think the number 80% refers to taxes paid by the 1% equates to 80% of the income generated to the state by tax payers not the income of that 1%.

Anonymous is not the sharpest knife in the drawer. In fact, he cannot understand the simple language of the article. It states "the top 10 percent of earners would be responsible for over 80% of the projected income generated". In other words, the top 1% will be paying half the taxes in the state and the top 10% will be responsible for 80% of all taxes. 90% of all Californians will pay only 20% of the state's taxes. Sounds really fair, right? The article makes no reference to the amount of income the top 1% makes.

Nobody's looking for your tears, Anonymous. Except the people that depend on that government revenue, when that 1% decides its not worth it to stay in California anymore. It'll be fun to see how the state balances its budget when its revenues are cut in half.

The revenues won't be cut in half, because there is no scenario short of a shooting war in the streets where ALL of California's high-income taxpayers leave. Remember, a large number of high-income Californians keep voting for, and making large political contributions to, the dipshit liberals that run the place. Any financial burden can be tolerated, I guess, so long as it remains lawful to have gay sex in the streets.

However, given the way there is gnashing of teeth and rending of clothes every time actual cuts of 1-2% are discussed, the departure of even a small slice of California's large taxpayers should be quite amusing to watch.

The 1% have TWO options... Accept the higher tax rates and enjoy a little less caviar.

Or tax everyone more and see your business tank when the middle class and lower class stop buying your products. Then you can layoff more employees.. and more employees will go on welfare. And fewer people will afford your discretionary products. Eventually crime will rise and start creeping into beverly hills neighborhoods.. The 1% will only be able to sell services and products to themselves and we will truly have class warfare.

Or you could just accept your tax increase.. invest in education, alternative energy sources and fund actually decent paying jobs for the middle class.

I have spent some time with the top 1% and am hearing a message that it's not just the taxes but the corrupt arrogance of Sacramento - , bullet train to nowhere but lots of cash for insiders, 5,000 new laws each year but never a balanced budget.

The governor's economic miracle is largely the result of changes in the tax laws that generated a one time bonanza. The increasing federal taxes encouraged many to take extra gains and income last year. The state shore of the income showed up in the first quarter along with the deposit of first quarter estimated taxes at the higher state rates.

While LA pretends to boycott AZ it may be to avoid having to explain to CA taxpayers why Intel is spending $6bil on new facilities, other companies are adding major whitecollar employment jobs.