FASCINATING: How presidential elections are impacted by a 100 million year old coastline

Deep Sea News has some fascinating observations about the ancient Floridian coastline:

Hale County in west central Alabama and Bamberg County in southern South Carolina are 450 miles apart. Both counties have a population of 16,000 of which around 60% are African American... These two counties share another unique feature. Amidst a blanket of Republican red both Hale and Bamberg voted primarily Democratic in the 2000, 2004, and again in the 2008 presidential elections. Indeed, Hale and Bamberg belong to a belt of counties cutting through the deep south–Mississippi, Alabama, Georgia, South Carolina, and North Carolina–that have voted over 50% Democratic in recent presidential elections. Why? A 100 million year old coastline. 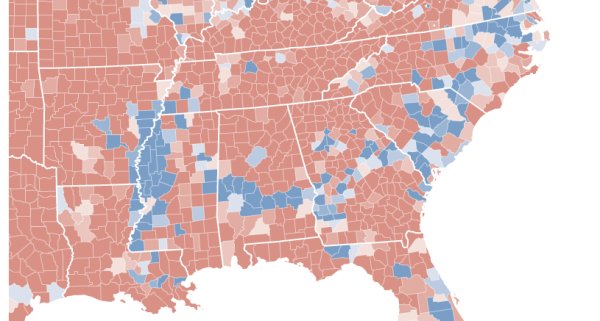 During the Cretaceous, 139-65 million years ago, shallow seas covered much of the southern United States. These tropical waters were productive–giving rise to tiny marine plankton with carbonate skeletons which overtime accumulated into massive chalk formations. The chalk, both alkaline and porous, lead to fertile and well-drained soils in a band, mirroring that ancient coastline and stretching across the now much drier South. This arc of rich and dark soils in Alabama has long been known as the Black Belt. But many, including Booker T. Washington, coopted the term to refer to the entire Southern band. Washington wrote in his 1901 autobiography, Up from Slavery, “The term was first used to designate a part of the country which was distinguished by the color of the soil. The part of the country possessing this thick, dark, and naturally rich soil...” 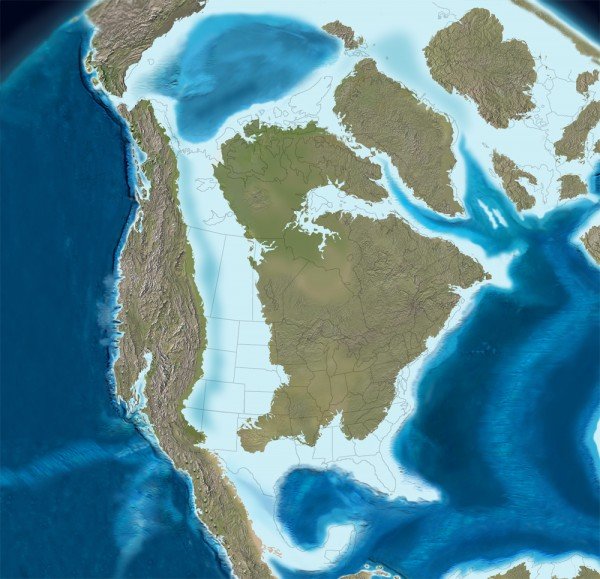 ...The legacy of ancient coastlines, chalk, soil, cotton, and slavery can still be seen today. African Americans make up over 50%, in some cases over 85%, of the population in Black Belt counties. As expected this has and continues to deeply influence the culture of the Black Belt. J. Sullivan Gibson writing in 1941 on the geology of the Black Belt noted, “The long-conceded regional identity of the Black Belts roots no more deeply its physical fundament of rolling prairie soil than in its cultural, social, and economic individuality.” And so this plays out in politics...

None of this explains why Blacks vote Democrat in great numbers. The Republican Party was created to combat slavery. Great men from Lincoln, to Booker T. Washington, to Martin Luther King, Jr. were all Republicans.

And the Ku Klux Klan was well-known throughout the 20th century as "the terrorist wing of the Democrat Party."

And, as we speak, conservative hero Allen West is fighting widespread vote fraud by would-be segregationists in the Democrat Party who have attempted to derail his reelection.

You see, drones, the freedom tent is the biggest tent of all. It embraces all races, religions, creeds and colors. It is the antithesis of the Democrat-Progressive tent that divides Americans by gender, age, income, race, religion and ethnicity for purposes of pandering and demonization.

We conservatives are on the side of liberty -- for all Americans. And that, my friends, is something you'll never hear a Democrat say.

The Republican Party ended the Whigs by finally deciding that ending slavery mattered, although Lincoln was at first reluctant to take that path at the expense of others permitting some servitude. However, after the War and the retreat from Reconstruction, the Republicans declined, and after the Great Depression, they became a party that only promised less but not an end to servitude to government, while the Democrats were only too happy to erase history and place peoples into thralldom in order to keep Dems in power. When and unless a political force arises that frees all people from lies and beholden lives to government given largess that government has by taking, we will all be speedily or slowly condemned to slave for what should be our responsibility. But all we hear is that we should love our chains and fear each other and freedom.

When I saw the large version of the states by red and blue 2012 election results, I noticed the same area as your stripe and thought "where have I seen that pattern before?" A look through recent bookmarks revealed the page:

Interesting connection that you point out from Gondwanaland --> slavery --> modern voting tendencies. Thank you.