Class warfare. The progressive income tax. Single-payer health care. All of these progressive policies come straight out of the Communist Manifesto and each is destined to end up just as successfully as their predecessors in the Soviet Union, Cuba and North Korea.

But, hey: why try to teach a progressive something he, she or it will never comprehend? Instead, stop working, relax, and play "Stash-o-Cash" - the Obama slot machine!

...in celebration of Barack Hussein Obama's re-selection as President of the United States, I present "Stash-"O"-Cash", an entertaining 3-reel slot machine. If you've had your work hours cut, lost your job, been forced into early retirement, or become house-bound because of rising living expenses, why not take a break and watch some "accomplishments" of Obama's first presidential term fly by as you try to match symbols on the pay line? Play long enough and you may even see the elusive "Stash-O-Cash Jackpot!" or even the equally-elusive "SUPER 'Blame Bush' MEGA-JACKPOT!". 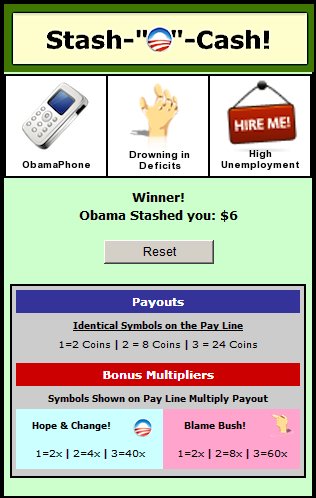 And, don't worry about getting a free payoff or keeping track of your winnings: The Government will take care of that for you!

Hey, since we're headed for fiscal collapse anyhow, why not have fun along the way?