Ancient Rome and the Bailout Mentality

[The Coburn] report’s cover has a picture of Santa Claus with dollars in his hand. It immediately reminded me of one of Chris Edwards‘ favorite books: Congress as Santa Claus, which was written by constitutional scholar Charles Warren in 1932. Toward the end, Warren cites a paragraph from a book comparing ancient Rome with the U.S. that’s worth reflecting upon: 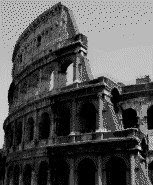 Little by little, the State let itself be persuaded to do for each of its cities what it had done for Rome…. With a view to easing the misery of the urban proletariat, it took public works in hand in every direction, regardless of their utility. It distributed victuals free or at half price…. But all these schemes cost money...

The intensification of the evil was met by an increase in the dose of the very remedy which aggravated it — useless expenditure in the cities, ruinous taxes on agriculture. Matters went from worse to worse, until the system reached the limit of its elasticity, and the whole social fabric collapsed in a colossal catastrophe.  This is precisely the mistake which modern civilization must learn to avoid.

I suppose it's a little late.
at 8:04 PM
Email ThisBlogThis!Share to TwitterShare to FacebookShare to Pinterest
Labels: Economy, Protecting America