During its interview The New York Times lobbed softball after softball at Carolyn Kennedy. And she responded with a shtick straight out of the movie Valley Girl. 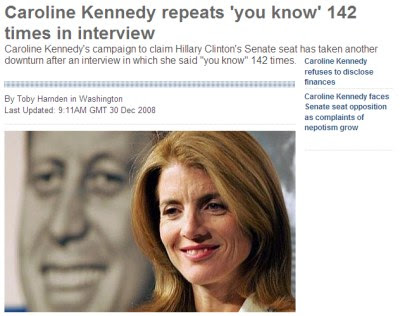 It really makes you wonder: what if Ms. Kennedy-Schlossberg had been pelted with the same questions Governor Palin received? Remember?

• The Cleveland Plain-Dealer's Connie Schultz claimed "[Palin] outed her pregnant daughter... [abortion] was never really a choice for this girl, unless she was willing to derail her mother's political career."
• The New York Times' Judith Warner characterizes Palin's selecton as a "thoroughgoing humiliation for America’s women."
• The New York Times' Maureen Dowd quotes a Palin detractor: "She’s a child, inexperienced and simplistic."
• The Kansas City Star's Mary Sanchez headlined a column "Palin is gloriously, fabulously unfit for duty."
• Chicago Sun-Times Columnist Mary Mitchell said "Sarah Palin makes me sick... [she] scares me... I couldn't help but wonder what it's really like for [her] kids."
• The New York Times' Maureen Dowd described Palin as "our new Napoleon in bunny boots."
• The Atlantic's Andrew Sullivan: "She is the biggest joke to be put on a ticket in national politics... [She is] Princess of Alaska."
• The Washington Post's Wendy Doniger: "Her greatest hypocrisy is in her pretense that she is a woman."
• The New York Times' Gail Collins: "Given Palin’s affection for shooting wolves from airplanes with high-powered rifles, it’d be more appropriate to have them cowering in their dens while she aims her machine gun from a diving Cessna."
• The Boston Globe's Peter Gelzinis characterizes Palin as a "snow princess."
• Salon's Cintra Wilson said Palin is a "Christian Stepford wife in a sexy librarian costume... like one of those cutthroat Texas cheerleader stage moms."
• Salon's Juan Cole: "What is the difference between Palin and a Muslim fundamentalist? Lipstick."
• Air America's Randi Rhodes: "She’s friends with all the teenage boys. You have to say no when your kids say, ‘can we sleep over at the Palin’s? No! NO!’."

• Sandra Bernhard warns Palin: "[don't] come into Manhattan lest she get gang-raped by some of Sandra’s big black brothers."
• Bill Maher: I will send (Obama) whatever I have to to keep this snarling bitch out of the White House."
• Chevy Chase instructed SNL to "decimate this woman [Palin]."
• Pink: "This woman hates women... the woman terrifies me."
• Brad Garrett said Palin is "White trash."
• Roger Ebert described Palin as "A shallow, chirpy person with those vaguely alarming eyeglasses."
• Pamela Anderson said the candidate "can suck it."
• Linda Carter: "She’s judgmental and dictatorial... I think America should be very afraid."
• Lindsay Lohan: "Is our country so divided that the Republicans best hope is a narrow minded, media obsessed homophobe?"

No, there's no double standard here. None at all.