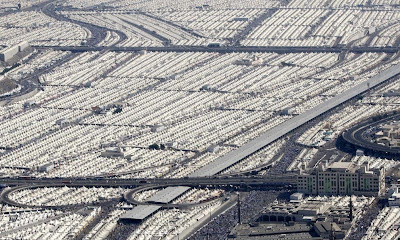 On June 15, 2008, Saudi Sheikh 'Abd Al-Rahman Al-Barak... issued a fatwa... rejecting the idea of conciliation between the Sunnis and the Shi'ites. He wrote: "The Sunna and the Shi'a represent two contradictory and incompatible philosophies, and comprise two sectors [of the population] which are different and not capable of marching in step… Calling for conciliation between Sunna and Shi'a is like calling for a rapprochement between Christianity and Islam - while everyone knows that heresy and Islam are irreconcilable opposites.

Linked by: Soccer Dad. Thanks!

at 9:45 PM
Email ThisBlogThis!Share to TwitterShare to FacebookShare to Pinterest
Labels: extremism